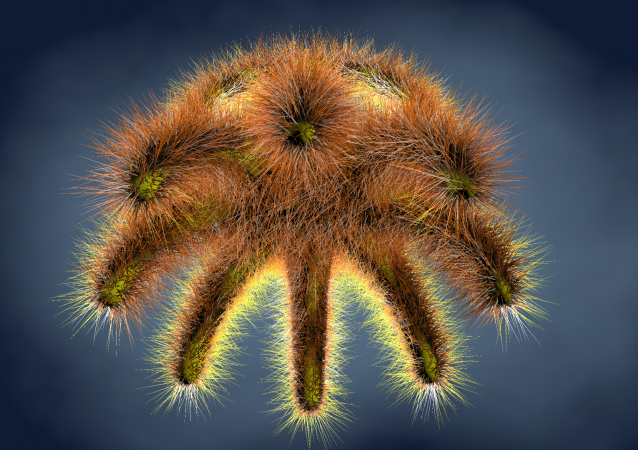 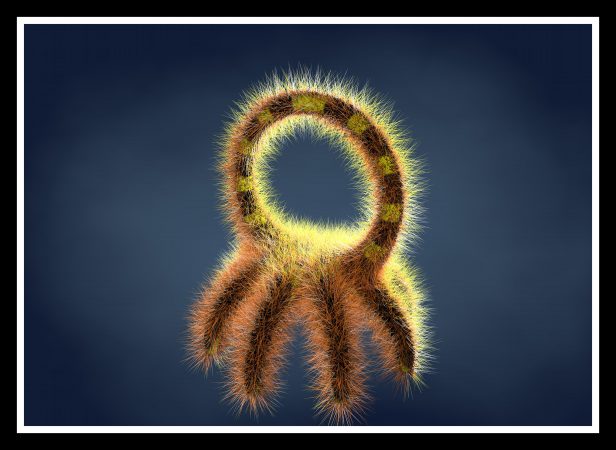 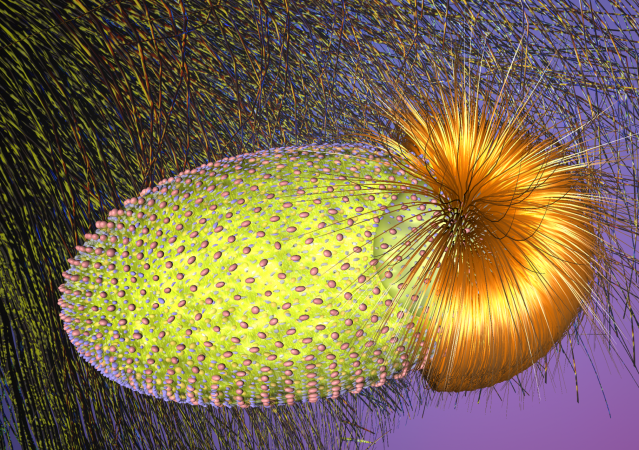 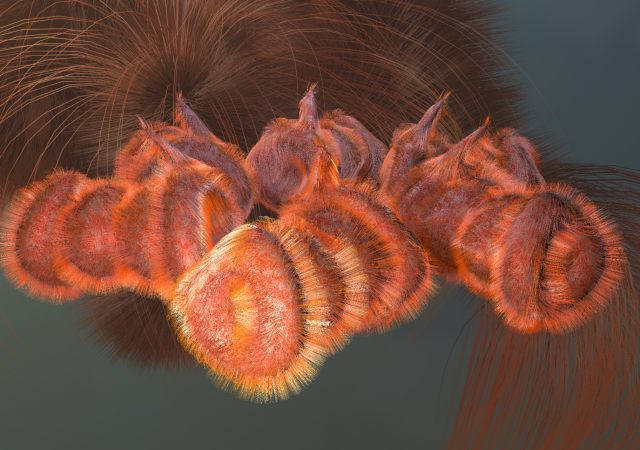 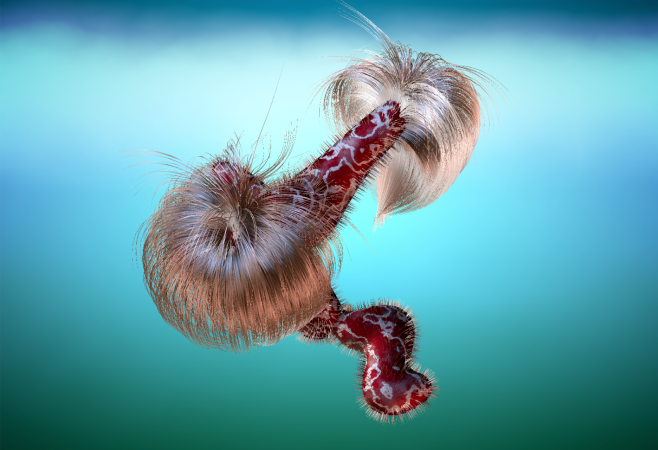 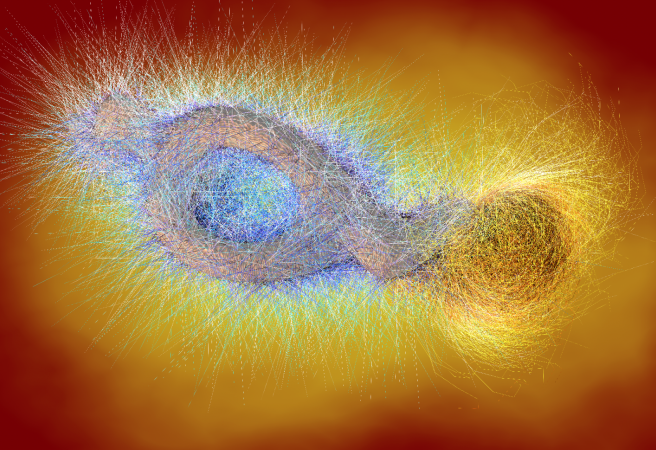 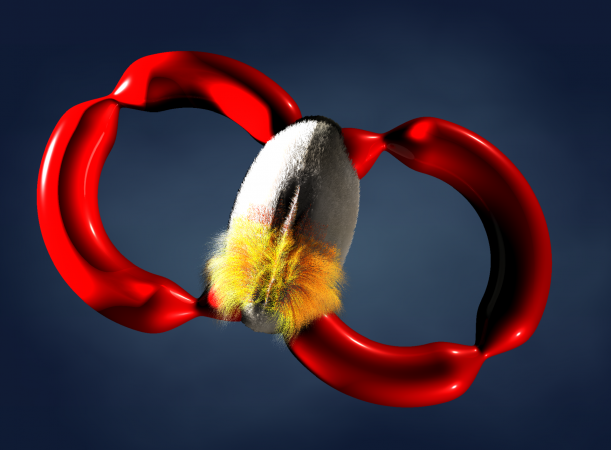 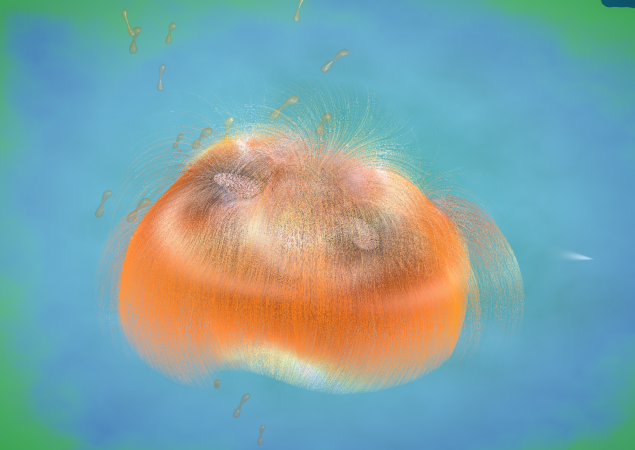 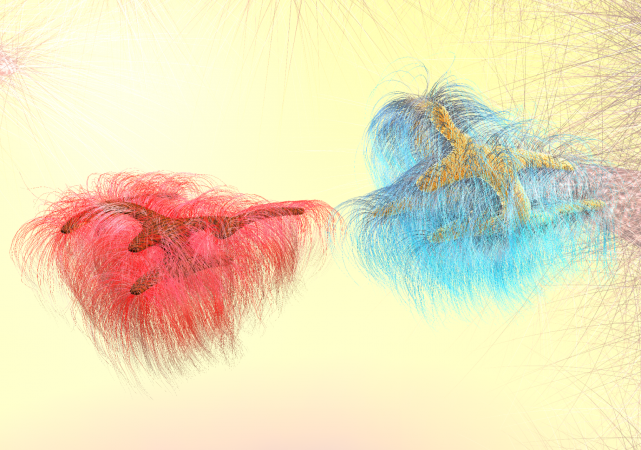 Virtual to Real Seeds: Dreams of Spring use nature as a model for designing phantasmagorical seeds. Imaginative artificial 3-D modeled seeds look at the evolved wisdom of plants and their ability to propagate by developing to exploit wind, water, and animal fur, to spread their genes.

One method is sheer numbers, and plants can produce 100s or thousands of seeds; one example may be the acacia tree in Africa which can produce 6000 pods each with 8-16 seeds. Another is longevity and the ability of the seed to last for long periods underground, waiting for water.

Looking at the co-evolved strategies in how seeds have developed capabilities to hold onto fur and feathers and the abilities of seeds to utilize animals’ digestive systems to break down their Testa coatings excites me. We see in the seed the insects and animals that have shaped that plant and seed strategies.

I came to more thoroughly appreciate this co-evolved coupling between flower, plant, seeds, and natural forces intertwining with the evolutionary pressures the seed is undergoing.

In my project, I imagined what artificial seeds might look like, given the new selective pressures technology and industry create on plants’ survival.

If we are going to kill off the bee co-evolved with flowering plants by spraying plants with neonicotinoids, thus killing the natural pollinators, perhaps we need a transgenic seed and bee to exist; all in one?

This gave rise to these phantasmagorical seeds, which I hope will restructure and help viewers to appreciate the impacts we are having on natural species of plants and animals.

A recent study by the Royal Botanic Gardens, Kew, and Stockholm University, The study confirmed 571 plant species extinctions in the last two and a half centuries. This was calculated after one of the study authors, Kew scientist Rafaël Govaerts. He found plant extinctions show four times more extinctions than the current listing of plants believed to be extinct. This number is twice that of mammals, birds, and amphibians recorded as extinct (a combined total of 217 species).

When studying the life of any being, there is always this realization that all life forms are more complex and intertwined than the narratives we wish to tell about them, with either science or art. However, while science holds facts, we can hope to connect with the emotional side of things to spur environmental action with art.

Seeds are the plant’s future; these works exist as models of future flowers, possibly transgenic, yet to exist.  They are printed as Giclee prints produced at the Centro Portuguese de Serigraphia in October 2013.

They are produced through research and study on the morphology of seeds and overall plant strategies.

The incredible variety of plant forms and the intriguing strategies they have come to utilize in spreading their genes are fascinating. As plants are rooted in the ground and cannot travel to spread their genes, the seeds are an essential evolutionary strategy for propagation. They are the most precious of developments, as they carry the next generation.

In researching seeds and reading widely, I think The Bizarre and Incredible World of Plants captures it perfectly with:

The seedings would have to compete for space, light, water, and nutrients with the parent plant and their siblings, and they would probably also encounter other unfavorable conditions and hazards such as predators and diseases, possibly already attracted by the parent plant. Traveling allows them to colonize new sites, thus expanding the range of the species.

In the end, the survival of not only the individual but the entire species depends on the seed reaching a suitable place of germination and establishment. Once ripe, the fruit has to somehow fulfill its biological function, which is the dispersal of the seeds. The crucial role fruits and seeds play in a plant’s life explain the variety of dispersal strategies that plants have developed during evolution. The system for dispersal – weather involving wind, water, animals, and humans or an explosive force from the plant itself is reflected in a seemingly endless plethora of different colors, sizes, and shapes.

The works within this exhibition are conflations of animal form, natural lessons, and methods that would carry the potential seed rendered in a hyper-realistic transgenic fashion. Bee seed has the hairs of the bee leg imagined with the coloring of the bee.

Other works suggest seeds intermingling with the formal aspects of the human form. As an artist, I am interested in seeds as a strategy – I am obsessed with the idea; that technology is also a seed.

It is a seed of knowledge, idea, and behavior actualized and sometimes propagated in culture.

While it would be easy to look at all the negative technologies that have impacted our futures and who we are becoming, as an artist, I have chosen to focus my energies on creating real-world solutions that plant ideas and real solutions to the future.

The Seed series in the Museum for Insects demonstrates one benefit of digital works: scalability.

Centro Portuguese de Serigraphia, Lisbon Portugal 2013
Invited by the Antonio Prates Gallery and Joao Prates of CPS to produce this new series for an exhibition.

This work can be displayed with frames individually or in groups.

Posthumanism in Art and Science by Giovanni Aloi and Susan McHugh