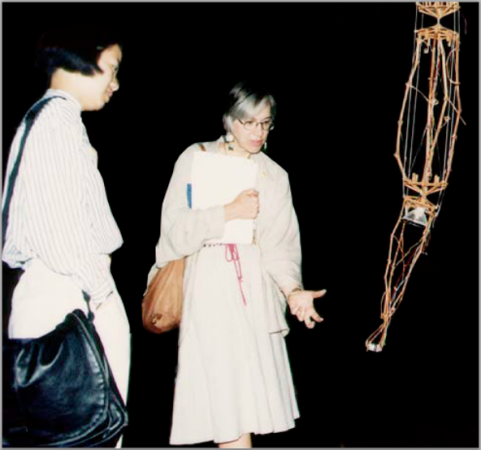 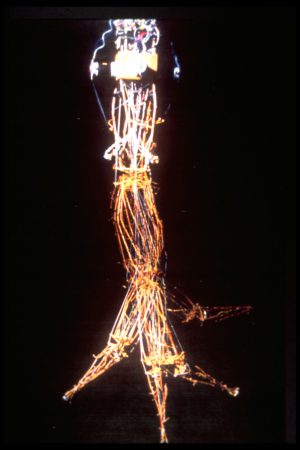 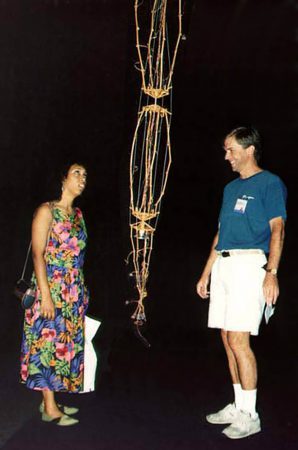 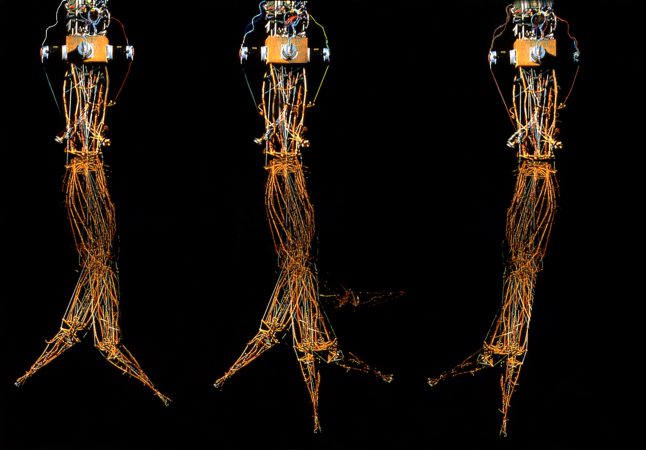 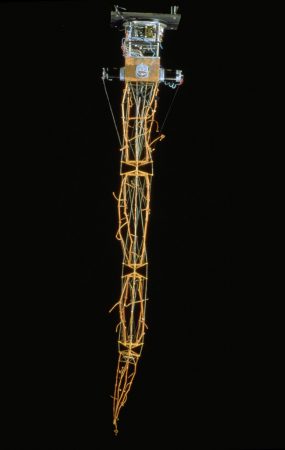 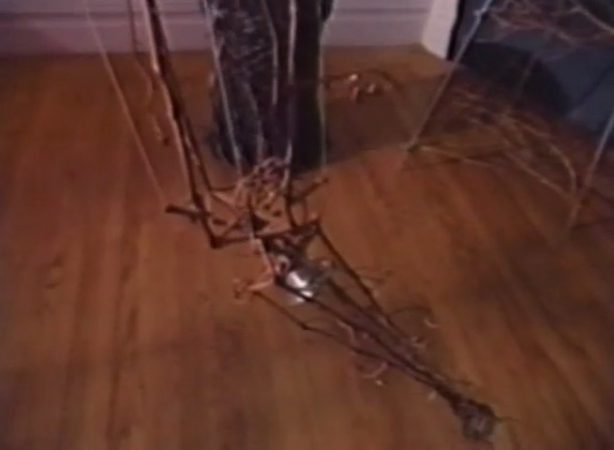 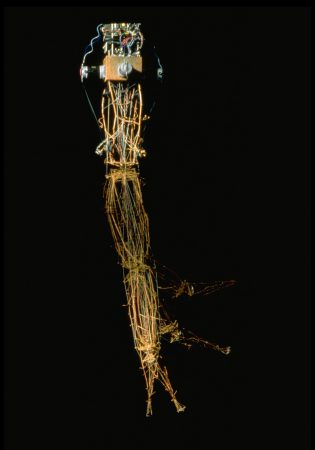 The Flock is a group of musical interactive sound sculptures by Ken Rinaldo and Mark Grossman, which exhibited behaviors analogous to the flocking found in natural groups such as birds, schooling fish, or flying bats.

Flocking behaviors demonstrate characteristics of supra organization, of a series of animals or artificial life forms that act as one creature. They are complex, interdependent interactions that require individual flocking members to be aware of their position concerning other flocking members. Our Flock consists of three 9 1/2 foot long jointed robotic arms, constructed from grapevines, which hang from the ceiling and interact with viewers, participants, and each other.

These works were invited to Siggraph in 1993 by contemporary artist/theoretician Simon Penny for the Machine Culture Exhibition. It took five years from 1988 to the invitation, which Mark and I rushed to completion.

Each dangling arm has an array of three infrared sensors projecting out from the top of the arm, which function as active eyes and permit the sculptures to avoid participants walking around the installation.

Another infrared eye at the tip of each arm functions to allow the sculptures to approach and simultaneously react to participants’ presence.

Each arm also has an array of four microphones which function as ears allowing the sculpture to move toward participants. The microphones are placed so relative volume levels of viewer/participants’ voices can be monitored.

The artificial creatures of The Flock were also given their own language. They communicate among themselves with audible telephone tones.

These telephone tones function as a musical and positional language allowing the sculptures to pass messages about a participant’s position concerning other sculptures.

For instance, an arm can tone-sing its position to the other arms, allowing them to follow its lead. The output speaker that plays these tones is at the tip of each three-arm joint closest to the floor.

When the sculptures locate a person, they sing with audible telephone tones to the other sculptures, which respond by repeating this tonal and positional sequence and pointing in the direction of the arm closest to the participant.

These simple behaviors set up a distributed flocking in the direction of the sounds coming from the participants.

Telephone tones were selected as this language of intercommunication between sculptures because they consist of the main tone and an overtone, which is unlikely to arise in everyday human speech.

This reduced the possibility that human intercommunication would miss-trigger the system. While these robotic sound sculptures are programmed to move in the direction of participants’ voices, the active infrared eyes allow the sculptures to avoid getting too close to participants.

This creates a dynamic state of attraction and repulsion for each sculpture. Here the participants and other sculptures in the environment affect the form, and the form modifies the environment, which then affects the form again; ad infinitum.

Each sculpture’s responses depend on the individual sculptures’ local interactions as they interact with the group (the other arms and the human participants).

The software allows a range of learned and unpredictable behaviors, emphasizing cooperation to produce a group aesthetic.

Each sculpture is controlled by a stand-alone processor, with intercommunication between sculptures only through telephone tones.

The central concept of this musical robotic series is emergence, the coming together of systems with no central controller guiding their behavior.

Here the behavior is allowed to emerge from the bottom up of all localized interactions. This distributed intercommunication permits the global behavior to evolve naturally out of all the local exchanges.

This work was super important in my art-making, and I am grateful to have met three brilliant captains of industry in Silicon Valley, Mark Grossman, John Dawson, and Joe Kennedy.

After conversations, I was introduced to John through Christine Sperber, and Geologist turned gallerist.

It was a gift to have conversations with these masters of technology as the work developed; this is one excellent example of the San Francisco Silicon Valley tech community supporting artists.

Special thanks to John Dawson for this connection in this process

Special thanks to Simon Penny, who supported the premiere of this work at Siggraph.

The brains and microcontroller within the work were surplus HC6800 taken from Silicon Graphics workstations and repurposed for this robot.