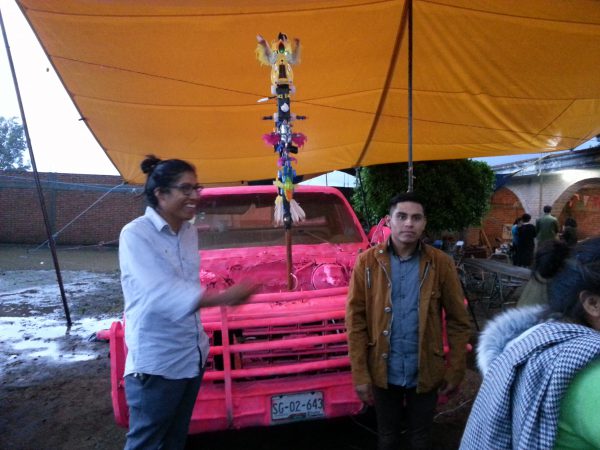 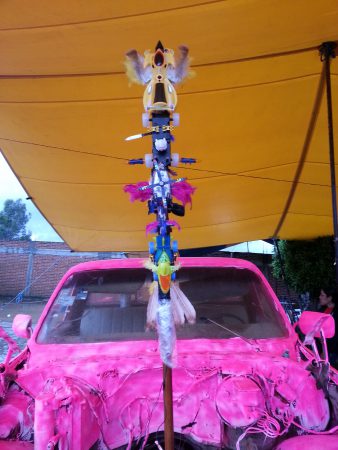 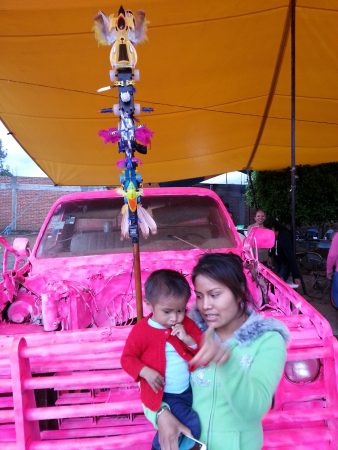 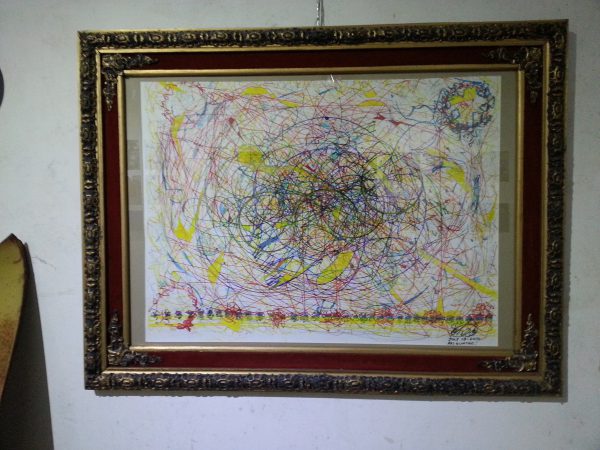 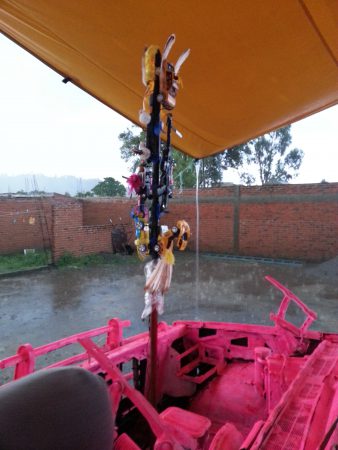 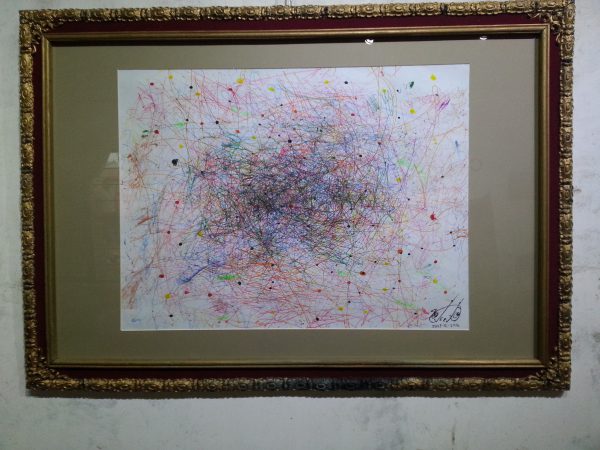 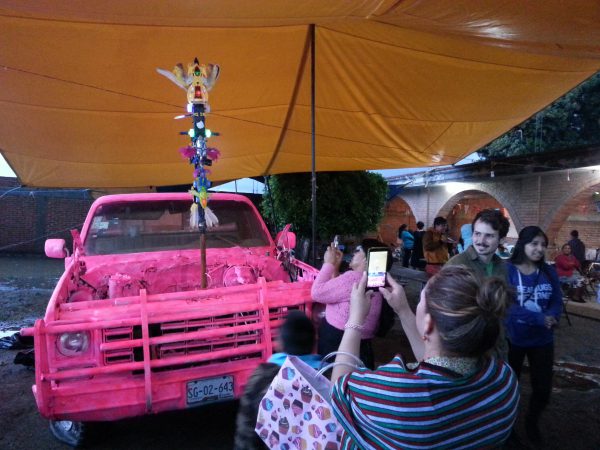 In a large, brick-lined yard where chickens and pigs roamed sits an old abandoned rusty truck. It still holds the worker’s desire for fixing it up, somewhere between its missing hood and flat tires. Federico’s uncle had wished to fix it and return it to muscle-truck glory.

Around the yard is rebar sprouting from brick in unfinished construction. It speaks to dreams of the future glory of comfortable homes, waiting for money to be sent to locals in Copan from US/Mexican immigrants.

Federico and I felt it could rise from the dead. Perhaps express some art spirit in the uncle’s wishes. We decided to collaborate and paint the truck bright pink and bring it back to life.

We shopped for and found many bump-and-turn robotic toys in Cholula, a small town next to Coapa. I carefully deconstructed them one by one. Before they were added to the totem in the image above, I felt they could manifest some drawings in the spirit of work and art. I constructed two

robotic drawing machines from the bump and turn toys and let them run for a few days till all the marks were complete.  I added small dots to integrate color and form a bit more. In the process of drawing, the toys produced two drawings, one eerily displaying a skull-like form. 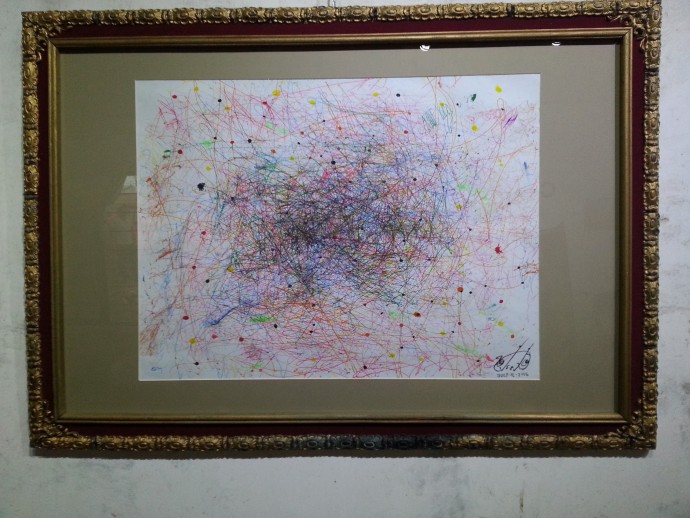 I wanted the toys to manifest the uncles and their spirits in these random robotic drawings. 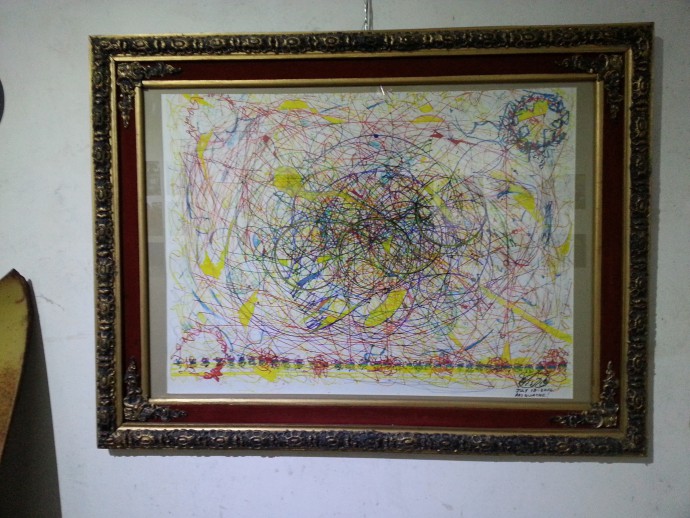 After the drawings were complete, the robotic toys were further deconstructed and rewired into a totem called the Angel of Car Death (Carro Angel de Muerte). It rose from the empty hood, where the motor would be.

The robotic toys were further wired to and controlled by an Arduino microcontroller.

All were displayed in the Concina de Humo Gallery, Federico’s mom’s smoke kitchen turned into a gallery.

As I was building the robotic totem, I felt It needed feathers to reflect the turkeys and chickens in every yard to speak back to the altars in each home. We’ll talk to this devoted city with feathered angel wings attached to each car part. A poet resident Matthew Sibley with excellent Spanish, asked the uncle and Aurelia Xique if they had waste chicken feathers.

I felt terrible that perhaps the chicken had been plucked for this artwork, though happy the chicken would not go to waste in this community where free-range chickens are part of many family meals.

Federico purchased other colored feathers in Cholula, many with bright colors and from various exotic birds. I glued them to the totem and the rewired mechanical toys, which angelized the work of making cars into angels. Even automated machine guns sticking out from attack toy

helicopters were made more pious.

Once it became dark, the totem was turned on, and we could visibly see the joy of the children and families.

We found an incredible city and a warm community with the extended family of Federico Cuatlacuatl and many talented artists. The well-funded residency was about using what is at hand and available in the community and creating art.

It was organized by Federico with the support of the Sophia Quintara Arts Center in Toledo, Ohio. Everyone just stops in the streets, including Federico Cuatlacuatl’s grandfather (the man named after the residency), with extended conversations, without the pressure and speed of modern society.

There are 365 churches in Cholula alone, and each house has a shrine in this deeply devout and loving community.