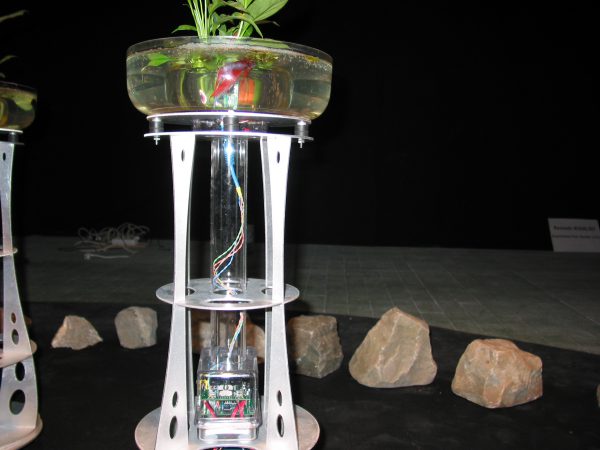 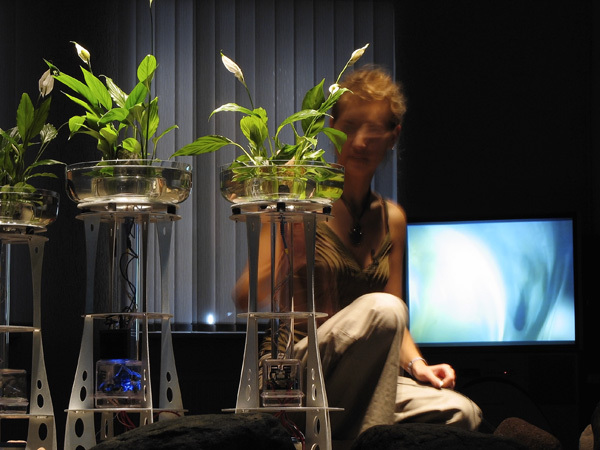 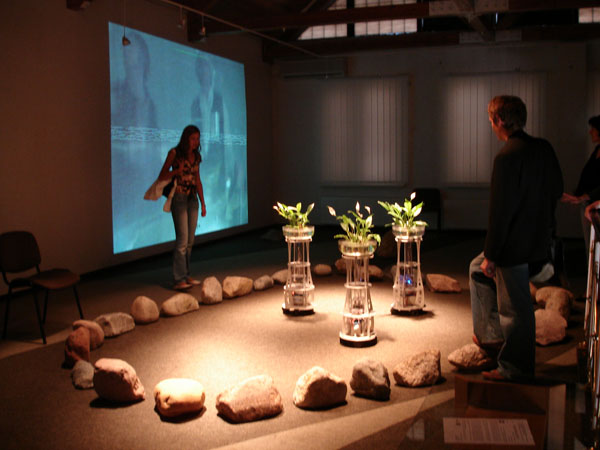 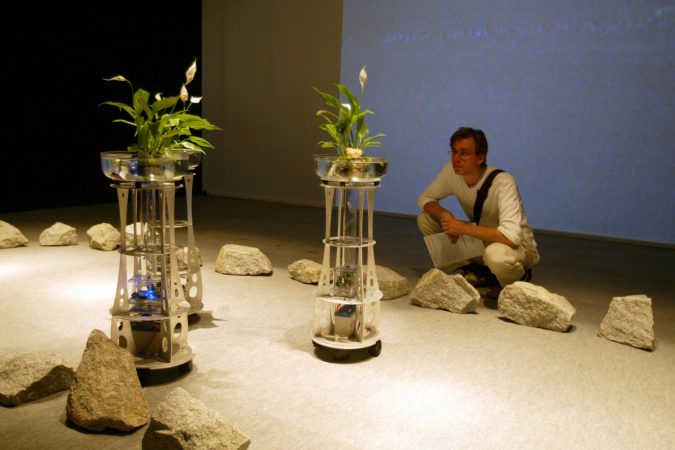 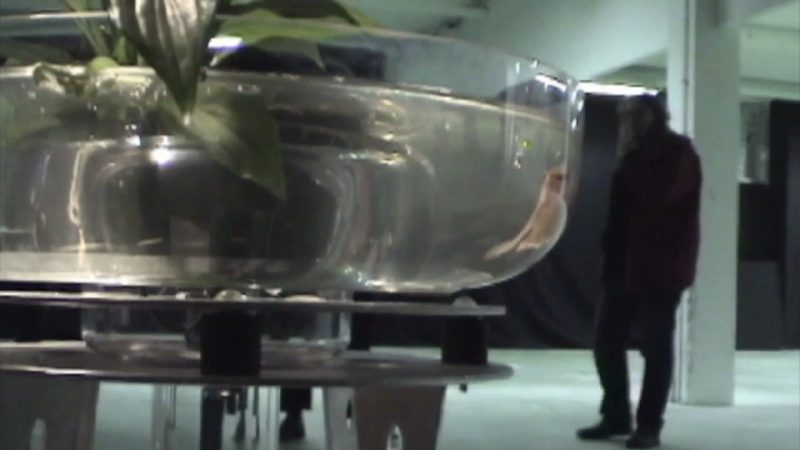 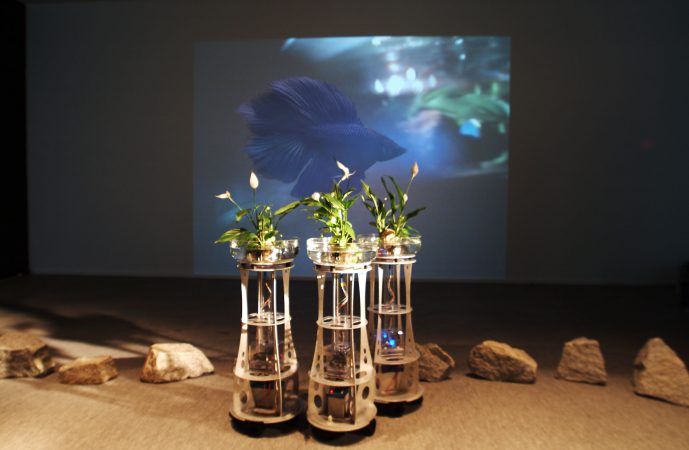 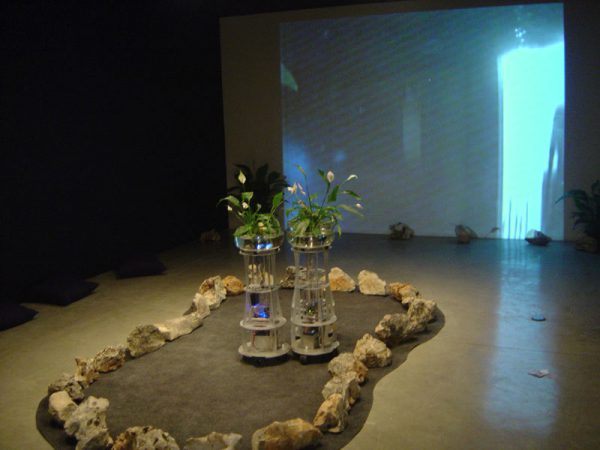 By moving about, they choose to interact with their environment and other Siamese fighting fish, which can also see clearly beyond their glass bowls and control their fish cars.

These works premiered and were invited by the European Capital of Culture, Lille France 2004, commissioned by Director Richard Castelli.

In an article entitled Learning in Fishes (Fish and Fisheries, 2003, vol. 4), editors Dr.s Kevin N. Laland, Culum Brown, and Jens Krause discuss revisions in thinking about fish intelligence, which seems much more significant than was formerly imagined. It is now believed that fish are “steeped in social intelligence.” The article reports that fish pursue “Machiavellian strategies of manipulation, punishment, and reconciliation” while displaying “cultural” traditions and cooperation to elude predators and obtain food. It is said that fish track the relationships of other fish in their environment and even monitor the social prestige of other fish.

It is now widely supported that fish build nests (such as the Siamese fighting fishes’ bubble nests) and exhibits “impressive long-term memories.”

Each robotic fishbowl in Augmented Fish Reality has four accurate infrared sensors. As each fish swims in front of the sensors, it activates the microcontroller, which activates motorized wheels in each fish vehicle. The sensors allow the fish to move the robot forward and backward and to turn it left or right.

Humans interact with the work simply by entering the environment, which often draws the fish’s gaze. Still, important these robots are under fish control (interactive art for animals), and the fish will choose to approach and/or move away from human participants whenever they choose.

Siamese fighting fish are top breathers, so they are comfortable in an oxygen-deficient environment. They take gulps of air from the surface to get enough oxygen, and a larger bowl, such as the ones used here, are excellent as a long-term habitat since there is a large area of water in contact with oxygen.

This living environment also includes peace-lily plants that absorb and prosper from the fish waste and, in turn, provide oxygen to the fish. Stones in each tank make the fish’s world more natural, friendly, and complex. There are both male and female fighting fish, and the robots are designed so that the fish can get within 1/4 inch of each other for visual communication.

Additional elements to this interactive installation are small lipstick video cameras mounted on forty-five-degree angles under one of the bowls that project images onto the gallery walls from the fish’s perspective.

During presentations, many ask, “Do the fish discover the interface?” I respond that I have yet to be able to ask them, although the fish certainly do move the tanks around.

The issue of this being random or not is, for me, irrelevant. The main issue is asking the question, acknowledging that fish are bright and, given more research, can and will meld into an interface.

Each successive stage of this project will continue to evolve the first fish-controlled robots, the Augmented Fish Reality.

I believe that we will eventually better break down inter-animal barriers by analyzing animal behavior, motivations, and communication strategies with statistical vision systems and computers.

We will be able to decode their behaviors with animal communication and environmental interaction, which will be exciting as it also reveals things about the human animal. In 2022 this is now being researched using AI and generative adversarial networks.

Letters from Dr. Culum Brown, a leading fish researcher, suggest that he is convinced that if the fish grow up in this environment, they may learn to use the interface, especially if rewarded with food.

Currently, the only reward the fish get is the social interaction of meeting each other across the gap between the glass and seeing other viewers.

Their environments are complex and rewarding. Robots are very good at sensing and responding to fish and human actions.

ANTENNAE, The Journal of Nature in Visual Culture, Ken Rinaldo, and Culum Brown – The Social Intelligence of Fish, by Ken Rinaldo