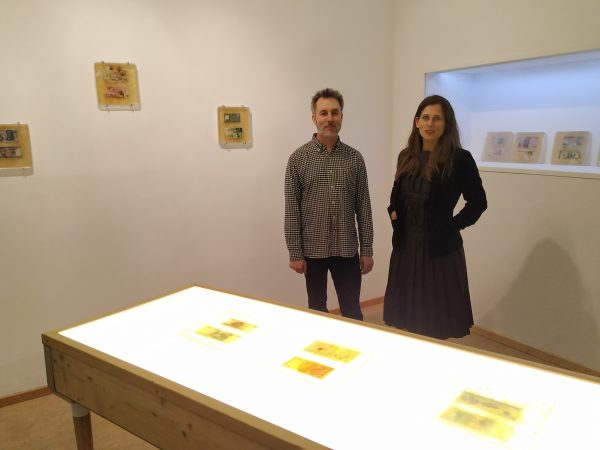 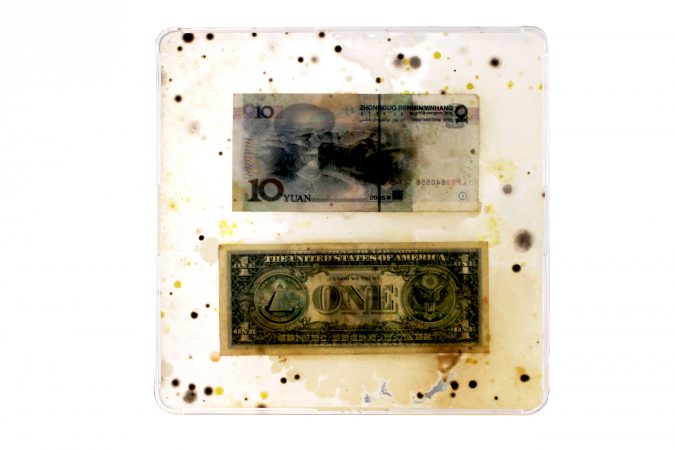 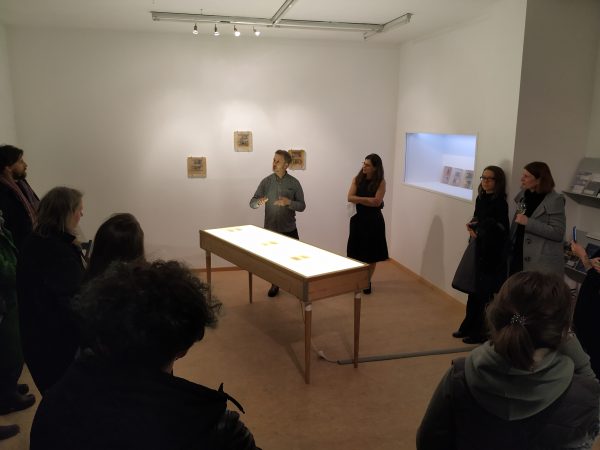 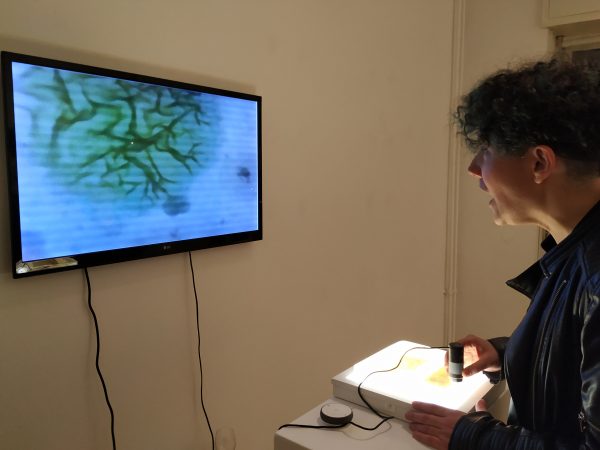 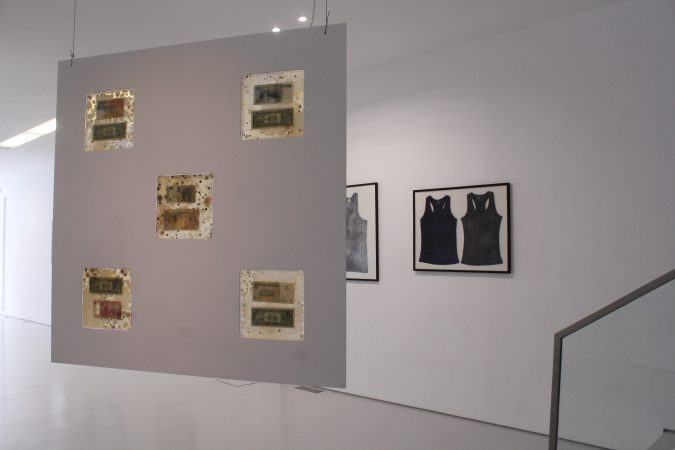 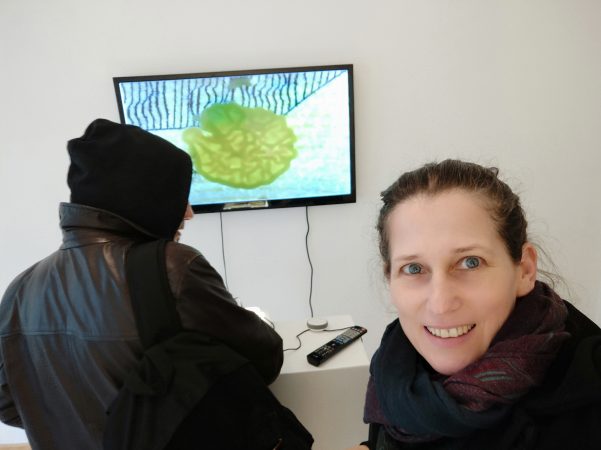 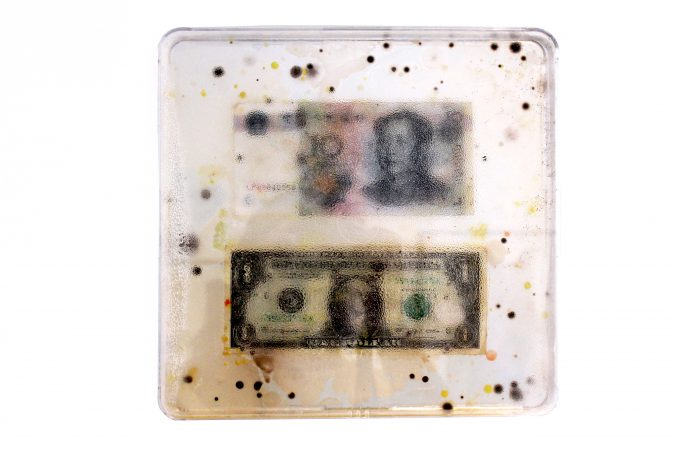 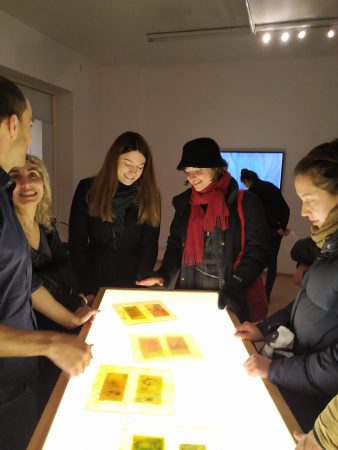 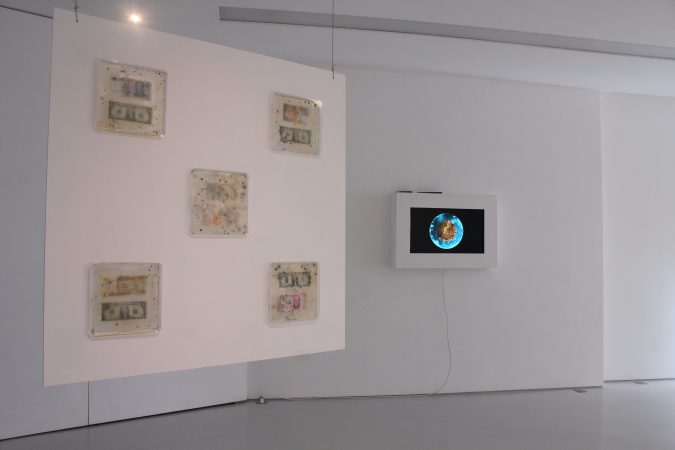 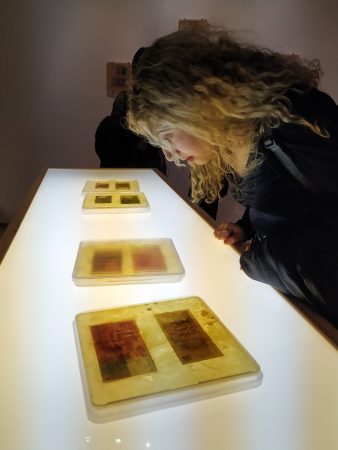 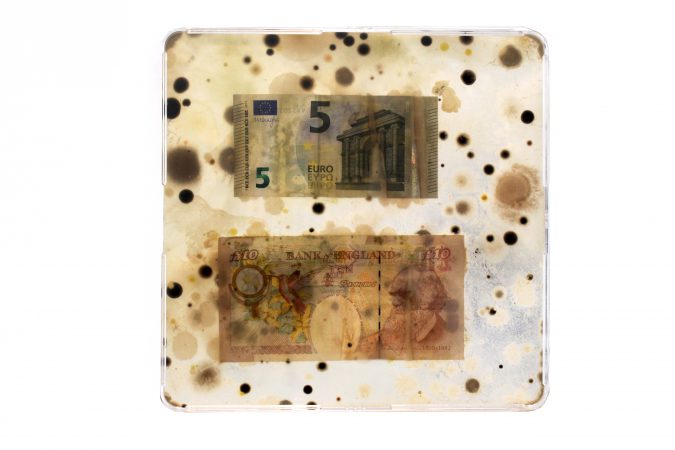 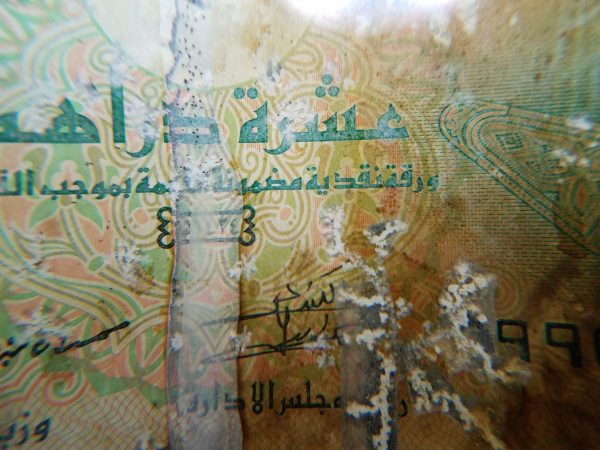 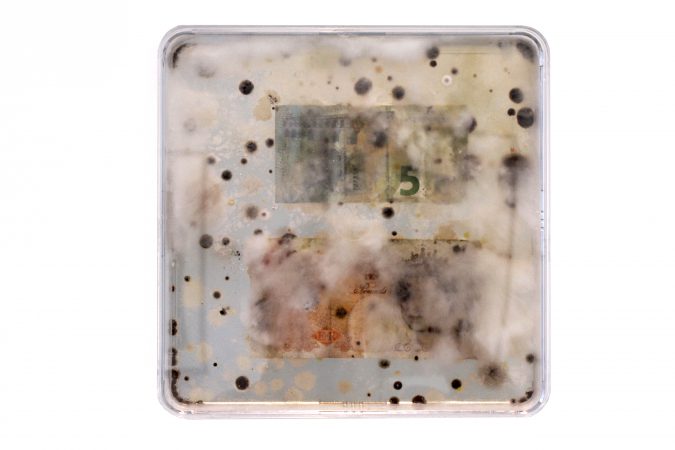 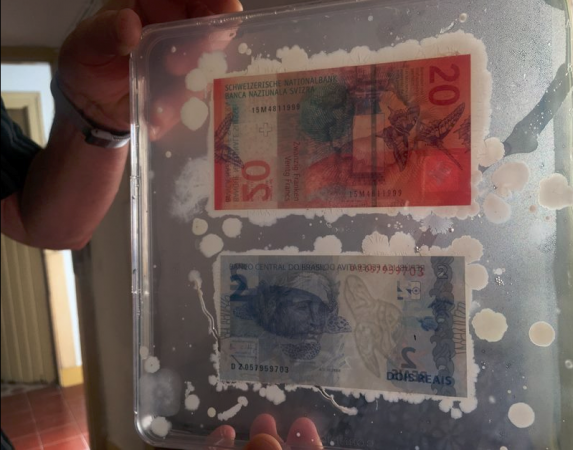 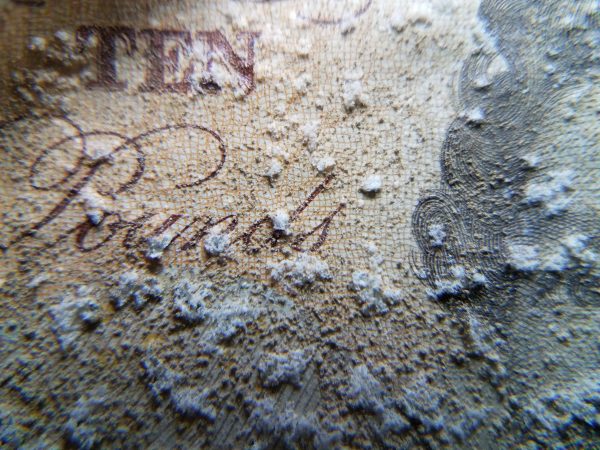 Scientists have identified up to 3000 types of bacteria on dollar bills from just one Manhattan bank. Most of the bacteria found were skin, mouth and vagina microbes according to a study conducted by the New York University Center for Genomics & Systems Biology. Bacterial cultures, fungi, and viruses finding transport on monetary exchange systems do not respect or understand borders.

There are no visas or passports for microbes that hitch rides from hands, noses, and genitalia. Money travels freely nationally and internationally. Cash is a vector of biological cultures traded globally.

It possesses formal symbolic memories of a colonialist past as well as emerging colonialist presence, driven by both microbes and now psychometrics with data analytics. As money is a potent signifier of identity, nationalism and a symbolic medium of exchange, it also possesses constitutional beliefs in iconic invocations of wealth and national trust. Money implies all the attendant deities and symbols of nationalist power and oversight.

Later advanced and scientifically substantiated by Lynn Margulis, lines of evidence have mounted in support of symbiogenesis, Prokaryotic organisms formed over time into organelles (i.e., mitochondria) of the eukaryotic cell.

When looking at Australian History and the history of South America, we can look at the Aboriginal Australians and the Khoikhoi populations also being decimated by smallpox, measles, influenza and other diseases.[1][2] 95% of the native populations are believed to have been killed by diseases that were brought by the Europeans; these microbes colonized themselves.

There was tremendous damage to indigenous Brazilian tribes by missionaries invading the jungle in the 1970s and 80s. They were unexpectedly carrying viruses and bacteria with bibles as vector killing the people meant to be “saved.”

With the outbreak of the Sars Virus and now the Coronavirus, likely both transmitted from bush meat, we are seeing another form of colonization from one species to another, and again bacteria and viruses are equal opportunity travelers.

The recent proposal of the USA / Mexican border wall by US President Donald Trump further adds to the dialogue of Borderless Bacteria and colonialist cash.

We are also experiencing other forms of colonization both financial and product-based, with free trade pacts like NAFTA and our extensive trade with China creating beneficial inexpensive products fueling our economy, though also trade deficits that have spurred our current president to create tariffs hurting both cultures.

Years ago I had also read that during the cocaine crises in the US and with our illicit trading with Columbia that most US money was coated with cocaine dust.

Of course, putting money in the nose likely introduced other species of bacteria, fungi and viruses and many a nose infection likely ensued.

Here we are in 2020, transforming slowly from real money to plastic and digital exchange systems. Bitcoin is also now being used for international payments and will we lose our immunity to certain bacteria and viruses because of the plastic revolution?

Although, for many countries the slow acceptance of digital transactions, leave cash as a dominant vector of disease.

Money is a vector of ideology, status, and power as well as borderless natural living systems. Do large and small monetary denominations reveal class divides? Are microbe culture hitchhikers on one-dollar bills more prevalent than on large denomination $100 bills?

As we are beginning to see, China further dominates the manufacture and distribution of goods exchanged with the US and internationally, how is the balance of the microbial exchange economy affected?

Given the Israeli blockade of Gaza, would bills from Palestine, having difficulty engaging in free exchange, show a reduced microbe count? Will they reveal no border for their mutually shared bacterial and historically linked cultures or can cultural differences be explained in isolated and unique bacteria, fungi and spores based on currency boundaries?

Will money from Portugal share more in common bacterially with the colonialist past of Portugal colonizing Brazil? If microbes have been coevolving with money as a vector since colonialist times, what is the collective cash microbiome developing from intermarriages between continents?

Does money from Switzerland (hiding wealth and power internationally) reveal “microbes of wealth” vs. money from Brazil, a nation with great material wealth and high working-class yet a different socioeconomic tier?

Can bacteria create signatures of wealth and status? Which microbes might we associate with wealth and class? Microbes have no borders and represent the original colonizers of us all. 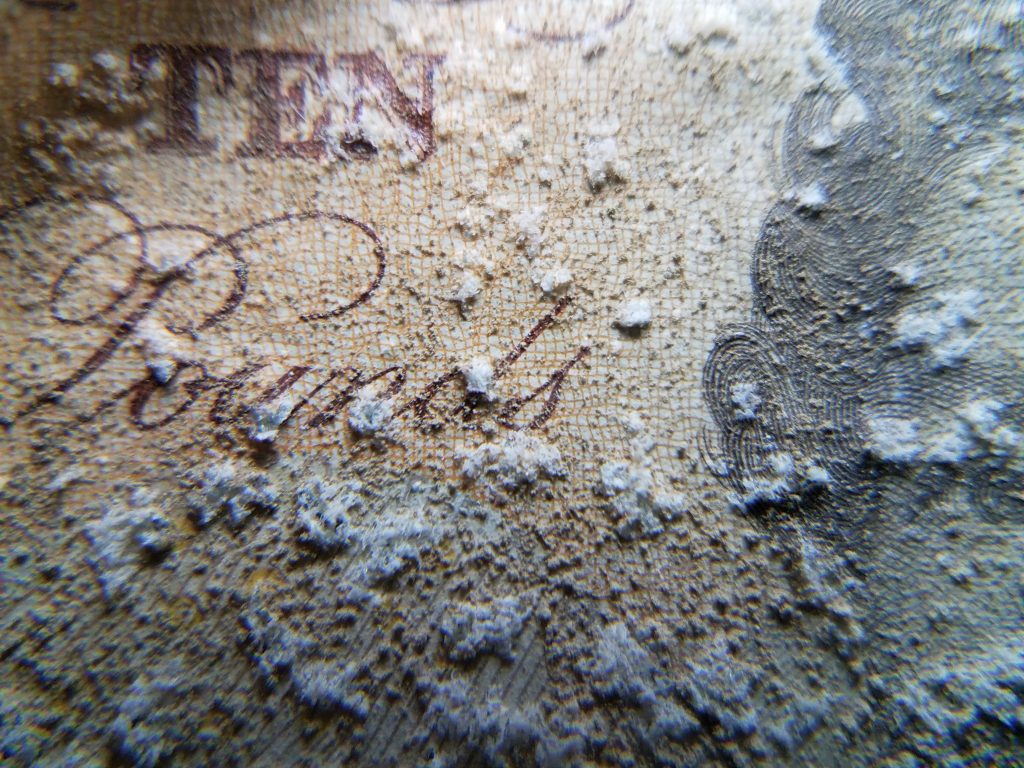 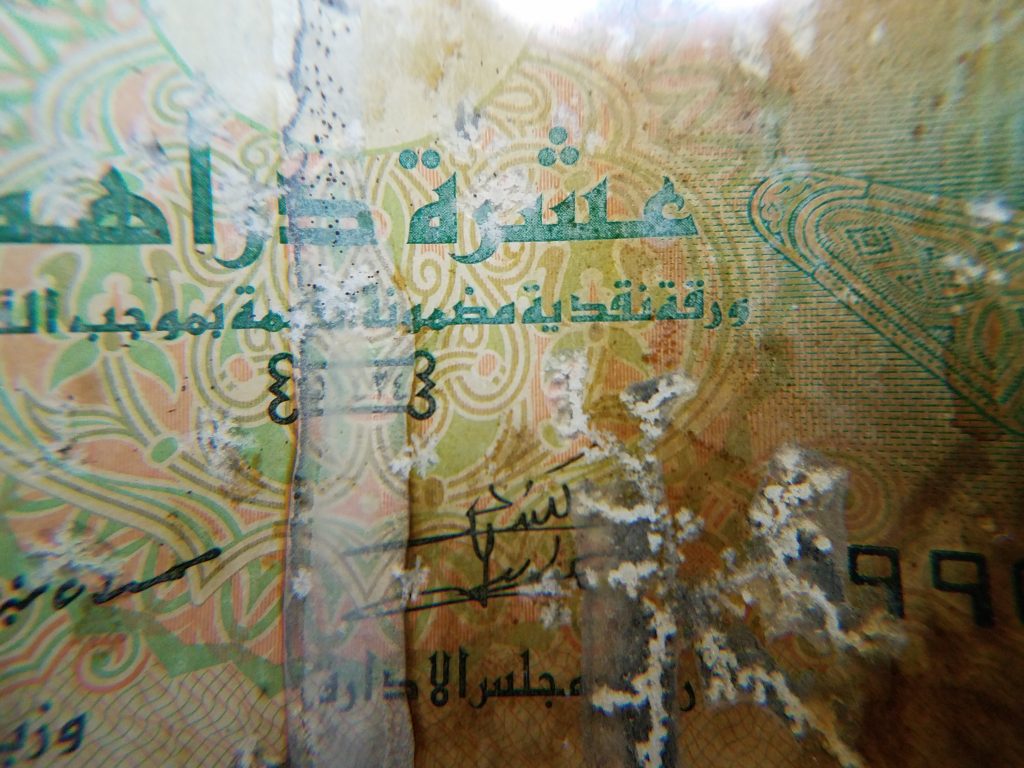 Borderless Bacteria / Colonialist Cash was first produced at the Cultivamos Cultura lab site in 2017 during a residency invited by Marta de Menezes, and then photographed, documented and or sealed or destroyed. 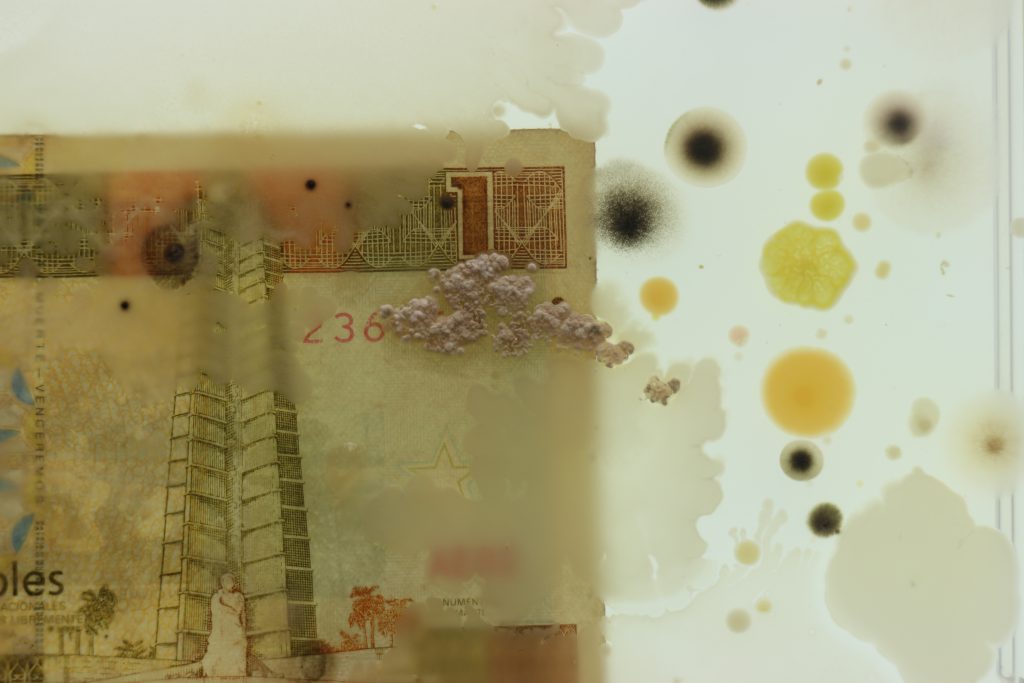 Preliminary works were shown in Portugal and are in the permanent collection of the estate of Marta de Menezes and Luis Graca. 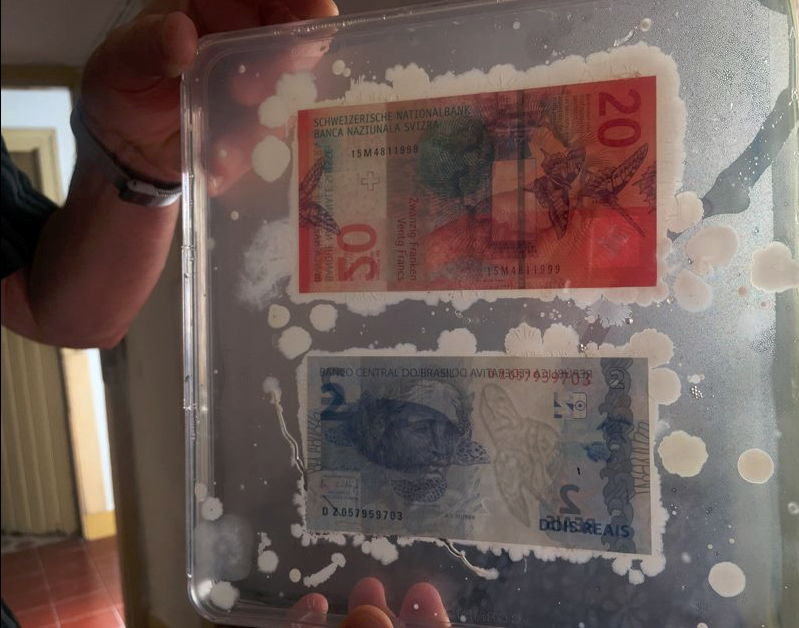 Additional works to unify the four other cities were produced in Columbus, Ohio and shipped to NY for further travel.

Much of our dialogue was spurred by discussions about not using international travel to do the exhibition given global warming issues, and my desire to fly less, and reduce my carbon footprint.

As part of this exhibition, Regine Rapp and Christian de Lutz did some very nice writing for the exhibition at the Art Laboratory Berlin linked above in addition to an interview about my feelings as regards international travel and the future of art exhibitions. That interview can be found here: interview

Columbian Pesos above and US dollar below. by Ken Rinaldo. The photo was taken by Maria Francisca de Abreu-Afonso.

2) Secure money from the airport exchange. Look for money that has been in circulation and not been cleaned. Do not worry about handling money, as it would seem normal, our bacterial exchange is a part of this project and our more thoroughly shared collective microbiome & holobiome. If possible, to secure money from countries that are experiencing border issues and conflict, it can demonstrate larger wars, and smaller ones on our skin and in our bodies, as our microbiomes react and interact with the world-wide shared microbes often experienced in travel.

3) Source for liquid agar with nutrients as a reference. Probably nearer sources in Berlin? https://www.sciencecompany.com/-P16230C2633.aspx?gclid=EAIaIQobChMI0bbO47fu4gIVAYvICh0X_gebEAYYBCABEgJ7oPD_BwE

4) Warm agar in the microwave until liquid, however not boiling. (Remember to remove the cap.)

5) When poured into dish agar depth should be 3-4 MM. After agar hardens 10 min, place two bills in each assay on top of liquid agar equidistant from sides. Make sure to press the bills into the agar.

Preferably use bills and colors with human figures, to draw us in, and understand our own colonization by these multispecies microbes and our colonization of other countries/peoples juxtaposed with our national currencies and political desires.

6) Close dishes and place in a moist area, without any direct sunlight for two to three weeks. Allow the humid and dark space to promote the growth of bacteria, fungi, and viruses. Do not seal them as they need oxygen to grow.

7) Before display, tape off the Petri dishes around the edges with clear sealing tape.
NOTE: (I have purchased some resin and will also be experimenting with using that, to seal the works.  Perhaps if that works, I can advise on how?

8) They can be mounted in wooden frames with bills visible from both sides to allow lighting or lay flat on light tables, which may be preferable. My experience with putting them on their sides, in the hanging wooden frames, is eventually the agar delaminated from the Petri plates, which was kind of lovely.

I really liked them on light tables with backlighting and perhaps this is our best option with the hope we can use a video microscope for exploration.

9) If you wanted to create the CNC frames, I used the outline of the petri dish to define the cutout in 5/8-inch plywood and used rounded L brackets screws with threads on one side to hold them in place. I can provide the illustrator files if you wish to go that route.

11) Place direct spotlights on at 45-degree angles to allow viewing of both sides of currency.

12) Placement: Avoid sun or near heat or HVAC source to keep moist.

13) Currency mixes, which stimulate discussions of current border tensions or trade disputes would be preferred.

As 2019 is the 30th anniversary of the fall of the Berlin Wall it would be fantastic to have an older east Berlin bill, juxtaposed with the newer unified German currency. For me, it is also admirable that Germany has accepted so many refugees and exemplifies the good neighbor. Recently, Hito Steyerl and performers reacted against what they see as the “tacit” complicity Germany has with Turkeys military offensive in Syria, not speaking up against the war with the Kurdish people in the Fourth Berlin Salon. The EU-Turkey refugee pact has left Europe vulnerable to intimidation and prevents sanctions against Turkey, who are killing the Kurdish. I also see waves of the past appearing in far-right government candidates, fortunately, many being held at bay, in Europe as Portugal’s recent election of leftist candidates demonstrates.

As the US and other European countries are moving toward fortification of borders, this work questions and provokes those tendencies and our own complicity in not accepting the “other”, which is us, with the subtexts of “purity”.

In terms of borders and colonialist tendencies, the US seems to be both the king and queen of international disputes. We have multiple simultaneous direct wars, officially undeclared wars, provocations to wars with many countries, and arming other Nation-states to feed our Military$Industrial$Complexes. Regretfully these Nation-states and political bullies use our munitions to fight battles, often leaving me, and a good portion of the US populace, feeling ashamed of our foreign policy and other nations in military ruin.

I acknowledge our own dark border/bacterial/colonialist/military propensities in time, even the suppression of our indigenous populations. It is time we acknowledge our collective bacterial multiracial constituency, in the interest of acceptance and peace.

Chinese Yuan on top and US Dollar below

Swiss Franc above and Brazilian Real below

Mexican Peso above and US Dollar below in the process of growing.

Chinese Yuan above and US dollar below.

Columbian Pesos above and US dollar below.

Mexican / US / or Canadian mix

Special thanks to Marta De Menezes and Dr. Luis Graca for the invitation to produce these new works and supporting production at Cultvamos Cultura in San Luis Portugal.

Thanks to Dr. Mario Ramirez Group Leader at iMM; Microbiologist for information about the best ways to culture microbes on the money.

Thanks to Amy Youngs for her Photoshop mock-ups of how it will all look when finished growing.

Thanks to artist Maria Francisca de Abreu-Afonso who is documenting these works in process in Portugal.

Thanks to Dr. Adam Zaretsky for editing help on this text.