The Chairello is an amplified, stringed instrument played both with a bow and hand, as with a base. The Chairello was constructed from a discarded office chair and a deconstructed base guitar.

The sound was amplified with a piezo pickup and sent to an amplifier through a delay effect pedal. 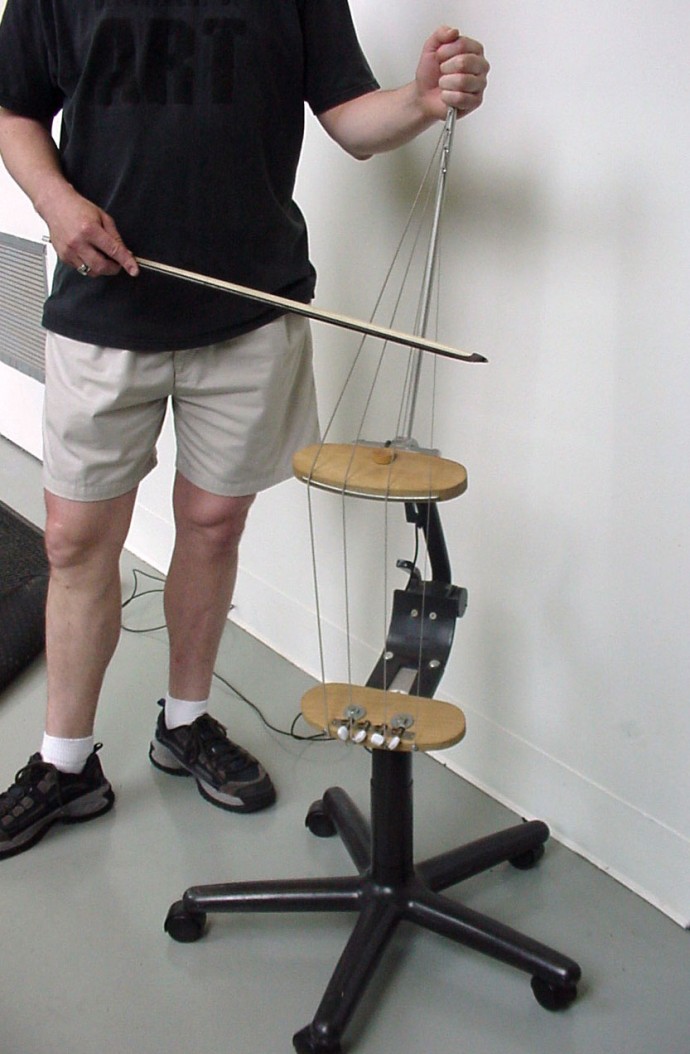 The sound from the Chairello was mellow when playing deep sustained notes and, at times, scratchy and nonmelodic. The strings could also be plucked as a base cello. At times I would hit the bow against the metal and strings of the Chairello and the piezo pickup running through the amplifier would create satisfying abstract sounds resulting from its structure.

Image two; is a Prepared Tape Machine below, which consisted of a pulse modulated tape recorder (changing the speed of the tape drive motor) and was controlled by programming from an embedded microcontroller.

This created sounds that were rhythmic and varied according to their programming. The sound here was distinct from the sounds made when scratching records but had similar qualities.

When switching between the radio receiver that was also part of this Prepared Tape Machine, I would alternately receive radio signals with the pulsing of the motor evident, and the chance aspect of the radio stations and static coming together with the other performers was quite satisfying.

Additionally, I used an embedded microcontroller to create a telephone tone machine with a randomizing algorithm in the program (image two), which became a sound element, not unlike a telephone gone awry.

By sending this sound through this delay pedal, I got some spectacular and unexpected effects, at times rhythmic and at other times discordant. 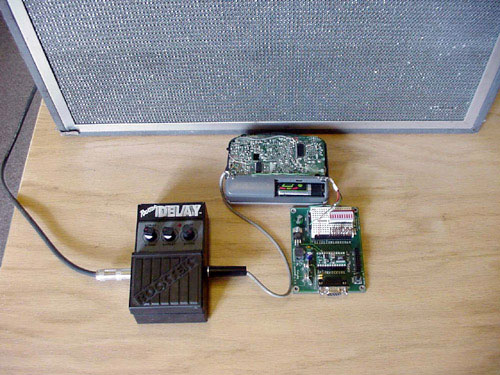 All of these instruments were built to perform with the Saccadia Quartet.

The movie is about the four members of Saccadia improvising together.

Carol Genetti is a vocal sound artist who combines Western opera, Bulgarian folk singing, and extended vocal techniques to create a world of sound that is mysteriously “insistent and relentless . . . evocative,” as Carmela Rago of Chicago Reader has stated. Jack Helbig. also of the Chicago Reader, has characterized her voice as “beautiful but baffling . . . haunting, [and] well-trained.” Ms. Genetti performs improvisational and self-composed works that are recorded or performed live. Her most recent work with Chicago-based instrument inventor Eric Leonardson-with whom she toured throughout Germany-can be heard on their CD Animus. Her twisted versions of jazz standards with bassist Tatsu Aoki can be heard on Gone Awry, a CD that will be released in 1999 Genetti has also performed with Pauline Oliveros, Jim Baker, Jeff Kowalkowski, Olivia Block, Yuko Nexus6 Kitamura, Michael Zerang, Saturo Wono, George Flynn, Dan Burke, Jeremy Ruthrauff, Michael Vorfeld, Claude Willey, Bhob Rainey, Greg Kelly, Bob Marsh and many others.

Andrea Polli is a digital media installation and performance artist living in Chicago, Illinois. She received an MFA in Time Arts from the School of the Art Institute of Chicago and is currently an Artist at Columbia College Chicago. She has exhibited and lectured nationally and internationally. Most recently, she performed at the Imagina 98 Conference, The Digital Whole in Monaco, and presented her work at the CAiiA 98 conference, Re-Framing Consciousness. An article about this work, Virtual Space and the Construction of Memory, is published in the Spring 98 issue of Leonardo. Other recent exhibitions include Observatories in Vilnius, Lithuania, and The Gun as Image at the Florida State University Fine Arts Museum. Her work was also shown in Reykyavik, Iceland, New York City, Indianapolis, and South Bend, where she received the Art and Social Justice Award and the Fereinkurze fur Neue Musik in Darmstadt, Germany. As a visiting artist at Alfred University in New York, she produced the multimedia performance/exhibition May I Help You? As a member of the board of Artemisia Gallery, she curated Ada, a renowned national collection of women artists and information technology for which she received an assistance grant from Adobe Systems, co-curated Meme Me: Identity in the Reproduction Age, in conjunction with ISEA97 (http://www.enteract.com/~artemisi/projects/web) for which she received an Illinois Arts Council Special Assistance Grant.

Eric Leonardson is an electroacoustic composer, performer and improviser, instrument inventor, radio artist, and sound designer. His works for dance, theater, radio, film, and video have been heard in broadcasts and performances throughout North America, Europe, and South Africa. In addition to his prolific solo work, he has worked collaboratively since the early 1980s. His most recent collaborations involve recordings and performances of improvised music with bassist and experimental filmmaker Tatsu Aoki, sound artist and instrument inventor Steve Barsotti, Dan Burke of Illusion of Safety, experimental vocalist Carol Genetti, multi-instrumentalist Bob Marsh, and multi-instrumentalist Scott Marshall. Leonardson’s interest in creating new sounds for performance and studio composition led to the invention of the “Springboard,” an electroacoustic percussion instrument made from an assortment of coil springs, combs, rubber bands, paint-mixing sticks, refrigerator grills, and other recycled items. His electroacoustic compositions are a regular feature in performances by South African choreographer Robyn Orlin, winner of many national awards (including two AA Vita Awards for Choreography), and with the Chicago-based physical theater company, Plasticene. Eric is a co-founder and former Radio Program Director of the Experimental Sound Studio (established in 1986), a not-for-profit organization for producing and promoting innovative sonic arts. He also teaches Time Arts in the First Year Program at the School of the Art Institute of Chicago and gives workshops on sound for theater at Columbia College.