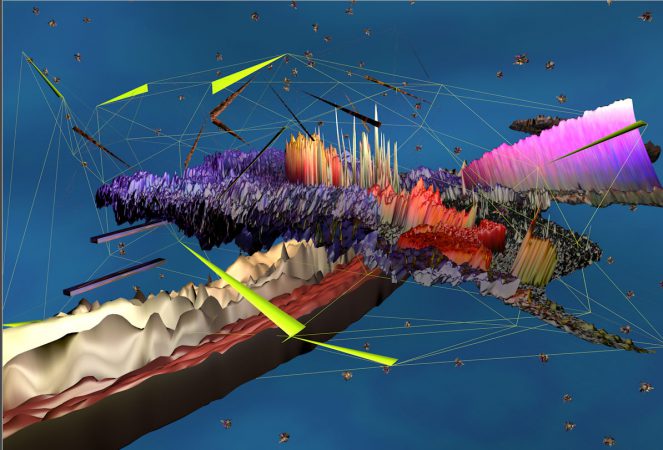 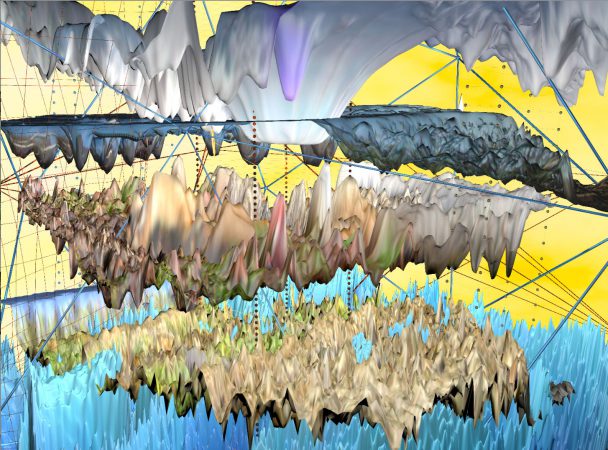 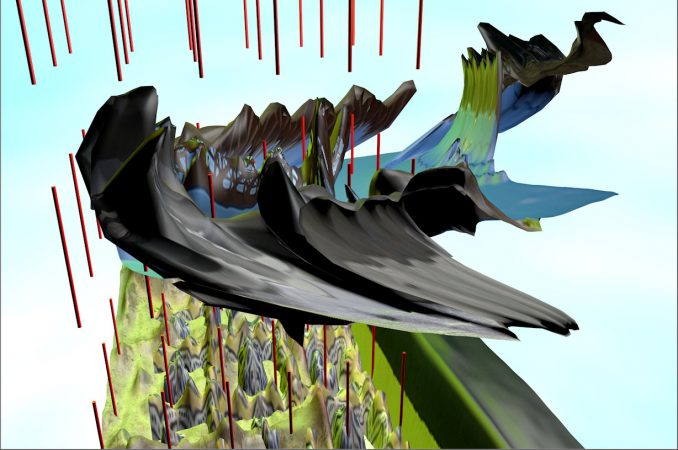 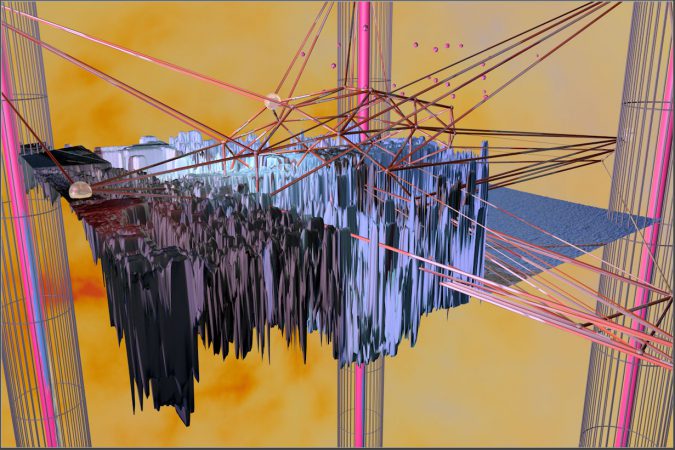 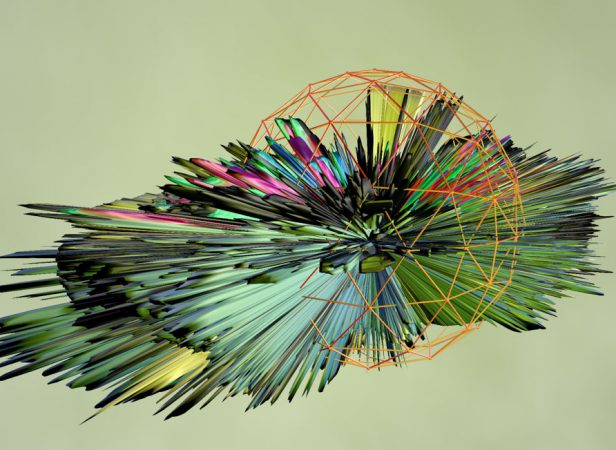 Portuguese Murmurations is a data manipulation series inspired by the architecture, nature, culture, and art I have experienced during my visits to Portugal. Dramatic features of Lisbon’s cultural landscape defined how these works evolved and how the natural and historical features inspired them.  The results focus on Portugal’s diverse flora and fauna, the convergence of the natural and built environment, music, blue sky, storks, culture, and bridges. These works are commissioned by the Centro Portuguese de Serigraphia for their 30th anniversary in 2015, invited by Joao Prates. As color and light create emotion and impact the psychic space of the city’s inhabitants, color and light are used to generate the form in this series through data transformation or data mediation between the data source and the image it allows.  The process starts with long walks on golden cobblestone while taking photos of the city. These photos are manipulated in 3D modeling software such that color and light data allow the generation and fluid manipulation of form. Transmutated forms are layered in a spatial dimension to create connections. By stretching color/light data in time/space, some sizes and not others allowed the data to relax in an area to reveal form, rhythm, and pattern. In these process-based works, waves of color and rhythm reveal syncopated and undulating structures mapped to the color that created that form. Murmuration is the act of many starlings flying together, and I felt it was an ideal metaphor for a data-based series, relying on free-floating and moving points to drag and create form.

Future City is an extrusion and extension of the city of Lisbon. Originating as photos of the life-sustaining river and connecting bridge, abstracted into space and superimposed on a floating ochre landscape.

The background is evocative of future-forward thinking ideas, and traditions in Portugal, like sustainable cork harvesting and limestone sidewalks. These seemingly old technologies point to newly desired trajectories that can serve as models for future sustainable and symbiotic practices.

Fado is a work from historical photos and a 1910 painting by Jose Malhoa of a Fado Singer with a classical guitar and a woman enraptured in song. Pictures of this painting and others of Amalia Rodriquez and Mariza are layered and algorithmically manipulated in one dimension in time to allow color and light data to create form.

The deep blue tones in this work visually speak emotions of love, beauty, sadness, melancholia, and the passion for life evident in the city’s inhabitants, more so revealed in this tremendously emotional Portuguese music genre.

Intermingle is a conflation of algorithmically manipulated photographs. Natural layers that exist in all cities, starting with land and progressing to the atmosphere and solar system, act as organizing principles of the construction. Images of water and bacteria function as form generators and connect visual glue between each layer.

The top layer is a data-manipulated sun and sky, and the subsequent layers are data-manipulated images of storks in a tower (protected in Portugal) with an Iberian wolf and a deep blue Portugal sky. Each layer is connected with floating dots and rhythmic lines to assert the interconnection of all; we share and are part of our evolution as a species through the water and its life-giving bacterial cultures.

Lisbon Rising is a work from data manipulated photos of historical Lisbon architecture. Pictures of geometric tile work and yellow industrial Tejo River cranes are manipulated in a three-dimensional software space against deep blue skies. The yellow construction cranes inspire me as they rise everywhere, as extensions of the human mind/hands/fingers, constructing and re/creating the city.

These data manipulated photos juxtapose the architectonic with geologic in allowing data mountains and ravines. They conflate the real, the virtual, and constructed space into a seamless whole.

The Music Cannot Be Contained is a work generated from a photographic manipulation of one of Lisbon’s recent public concerts in the park. The photo was expanded so that the image allows the result to appear to be sound exploding from a central point.

As music and sound travel through time, the work is extruded outward in the sonification of data. The image as a generator is conflated with a visual metaphor for that sound.

Sonic Space is Memory is also generated from photographing the concert in the park and then extruding the light and color data into this form. Parts of the photo, such as the large Phototron screen, are manipulated in 3D space and mixed with images of humans listening and dancing.

The exuberance and undulations of these works reflect the joy and color of the city’s people and inspiring natural and cultural landscapes.

This work can be displayed with frames individually or in groups.