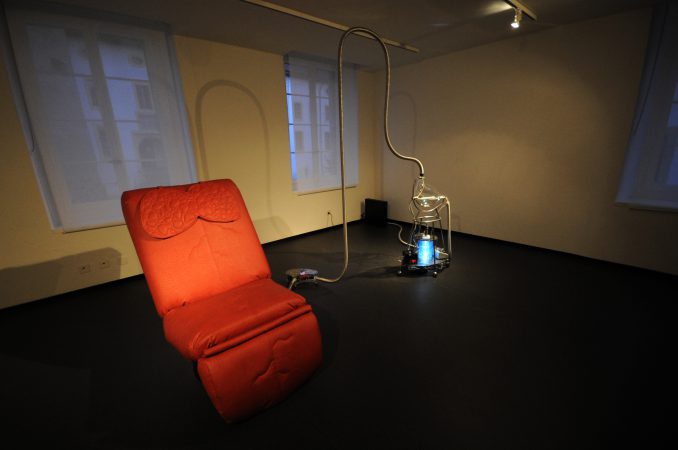 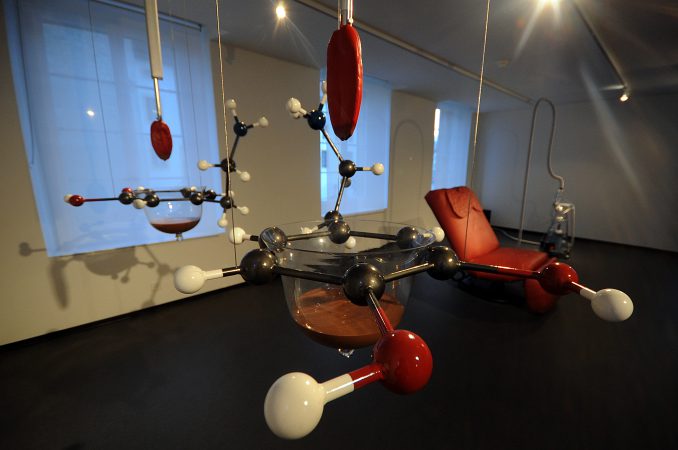 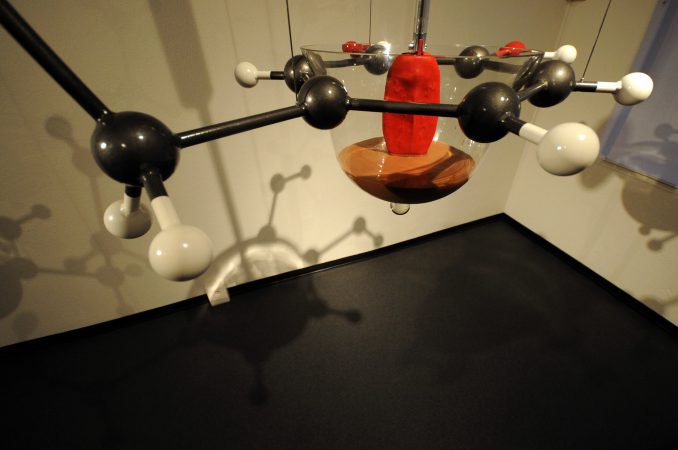 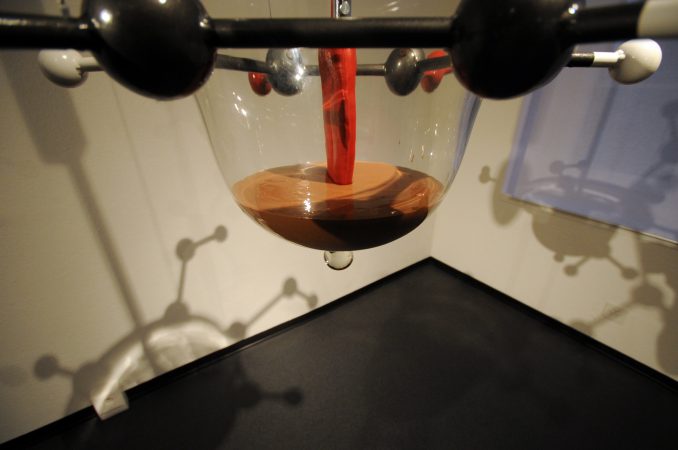 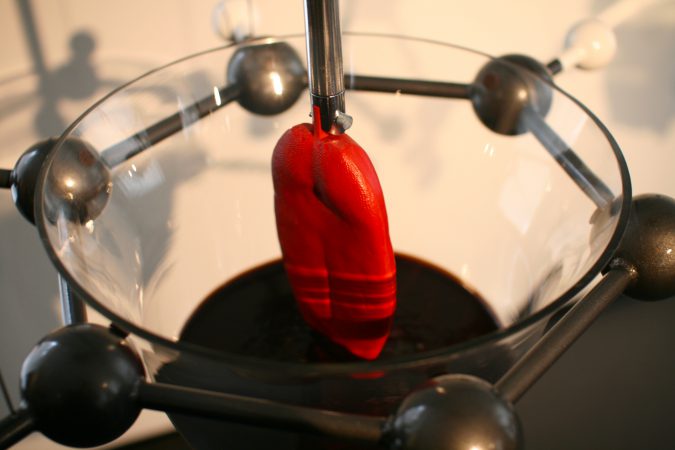 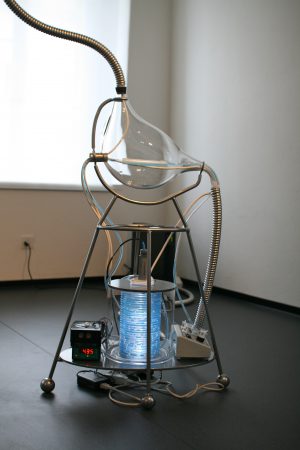 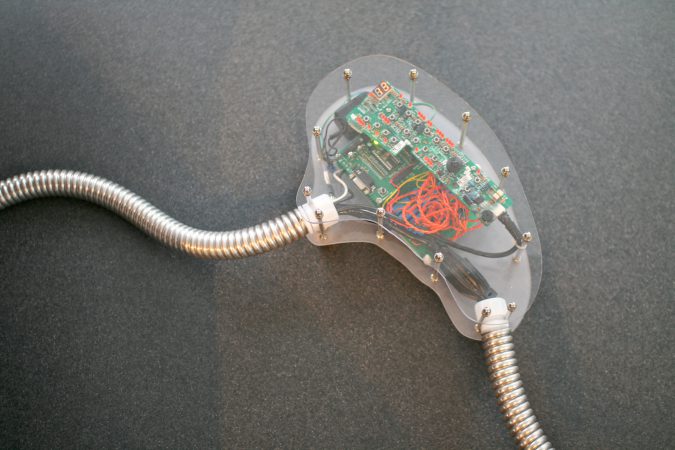 The Enteric Consciousness is an interactive installation focused on our conscious microbiome in each of our stomachs. A large glass-shaped stomach is filled with the living bacteria (Lactobacillus Acidophilus) and activates a sizeable robotic chair in the shape of a giant tongue.

The tongue chair gives you a comforting 15-minute massage only if the bacterial cultures within the artificial stomach are living.

This work explores our sense of touch and corporeal experience with bacterial cultures driving the robot’s function. Two robotic tongues dip into chocolate, and cheese pools in glass containers, suspended with steel dopamine molecules. Dopamine mediates the subjective experience of pleasure in humans, and chocolate boosts antidepressant serotonin and stimulates secretions of endorphins that create pleasurable sensations in the brain and gut. Electronic peristaltic pumps replicate natural gut action, moving cooling water through the microbiome bacterial cultures in the glass stomach to keep the bacteria cool, happy, and healthy in this symbiotic system.

Our stomachs are considered the enteric nervous system ENS, which is embedded in the lining of our gastrointestinal systems. Our natural stomachs or the enteric nervous system is 1/10 the number of neurons in the human brain and share the same neurotransmitters such as dopamine, serotonin, and epinephrine through processing the experience differently than the brain. Our ENS is composed of one hundred million neurons, or about one-thousandth of the number in the human brain.

If the hand and finger can be seen as extensions of our human brain, then the tongue can be seen as an extension of the enteric nervous system, seeking out what it prefers to ingest.

I have chosen in this work to focus on our sense of touch and corporeal experience as a way to explore interactivity, as our largest sense organ is our skin. When thinking about interactive art, I realized there are only a few examples where touch is central to the work.

Here the touch of the robotic tongue as the activating agent affects the experience, which is much more visceral and emotional.

As peristaltic muscle movements propel food and bacteria through our natural stomachs, so the electronic peristaltic pump artificially replicates these movements as it moves cooling water through the artificial glass stomach to keep the bacteria cool and slow their growth.

A PH meter constantly measures the acidity and basicity of the bacteria. It monitors the health of the bacteria in the artificial stomach. These signals were interfaced to and activated a series of relays and microcontrollers that allowed the robotic tongue chair to activate, relax and massage the viewer/interactant.

The robotic tongue chair is covered with an artificial red emu leather that looks like swollen taste buds of an enlarged and hungry tongue.

While our natural stomachs are sterile at birth, they are soon colonized by 10 of 1,000s of bacteria, which mediate and influence what we eat and enjoy. The enteric nervous system and our brains carry on bi-directional communication and share many common neurotransmitters, such as dopamine and epinephrine.

A scientist has identified a structure called the neural crest in all humans, which forms as an embryo develops. One part of this group of cells in the neural crest evolves into the central nervous system, and the other part becomes the enteric nervous system. The enteric nervous system is also influenced by neurotransmitters and hormones, and our central nervous system can also affect stomach muscle movements, mucosal functions, and blood vessels. It is now well accepted that one of the most important jobs of the bacteria in our digestive system is to improve and regulate our immune systems.

Another element of this installation will be two smaller robotic tongues that dip into and out of chocolate and cheese pools in large glass containers. Large dopamine molecules constructed in steel hold up the containers.

The dopamine molecule is believed to mediate the subjective experience of pleasure in humans and other animals. Chocolate and cheese (sugar and fat) are two substances that both the tongue and the stomach desire. Research has proven that chocolate can boost serotonin, an antidepressant molecule, and it can also stimulate secretions of endorphins that create pleasurable sensations.

This work is mainly inspired by the notion of the conscious stomach. However, it is also inspired by the idea that humans are not individuals so much as clouds of intertwined human, bacterial, and machine cells.

We have evolved into hybrid symbiotic ecosystems that consist of trillions of living bacteria. Humans have as many bacteria in and on us as human cells. Our armpits, crotches, and guts are like rainforests teeming with microbial life, and our backs are like deserts.

The bacteria within and on us are eating and surviving, and our bodies provide for their sustenance. There are one thousand trillion (1015) bacterial cells versus one hundred trillion (1014) human cells in each of our bodies, yet the human body does not end there. Bacterial cells are an important part of our health, helping us digest indigestible foods and make essential vitamins and, ultimately, impacting and forming our immune systems.

Liping Zhao recently wrote in the Journal of Biotechnology, “Humans are super organisms with two genomes, the genetically inherited human genome (25,000 genes) and the environmentally acquired human microbiome (over 1 million genes).” She also wrote, “In contrast to the human genome, the gene composition of the human microbiome is rather flexible and can be modulated by foods and drugs.”

This cloud of cells described above also finds analogs in “machine cells” distributed above and below the earth, where they regulate and feed human society. These machine cells are engineered and self-regulating systems that serve to support human existence. They are networked microprocessors, stoplights, hundreds of trillions of transistors in intelligent devices, and oil, water, and waste elimination subsystems.

By looking closely at and thinking about our engineered human existence, we reveal a comfortable proto-embryonic sack of chips and wires feeding into more extensive dendritic networks of 100,000-volt power towers and pulse-coded and frequency-modulated telephony and uplink satellites, all in the regulation of human needs. We cannot imagine the human-animal surviving without our now symbiotic relationship with these engineered systems and our coevolved bacterial symbionts that regulate our lives.

Just as bacterial cells are autonomous living networks, our robots rapidly emerge into proto-living systems as they self-regulate, motor around our environments, and begin adopting caretaking roles for humans.

The Enteric Consciousness 2010 installation realizes an immersive space celebrating the symbiotic relationship between the bacterial cultures that live in and on us and a new emerging ecosystem of human-engineered robotic entities that inhabit our homes, offices, and with nanotechnology, our bodies.

Full-size room with no intervening sound or projections. AC 115-220 HZ.

DO ROBOTS DREAM OF SPRING? – The Art of Ken Rinaldo at the Maison d’Ailleurs. Retrospective with forward by Bruce Sterling and Patrick Gyger. Yverdon-Les-Bains: September 19, 2010, to March 20, 2011

Do Robots Dream of Spring? Ken Rinaldo exhibit at the Swiss Museum of Science Fiction September 21, 2010, by  Nicolas Nova