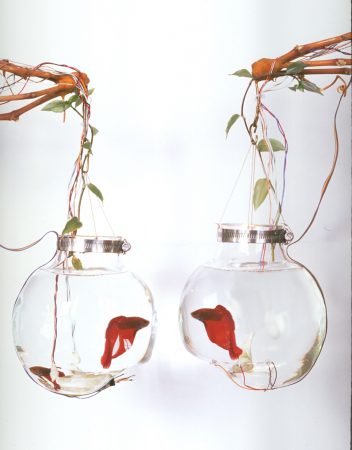 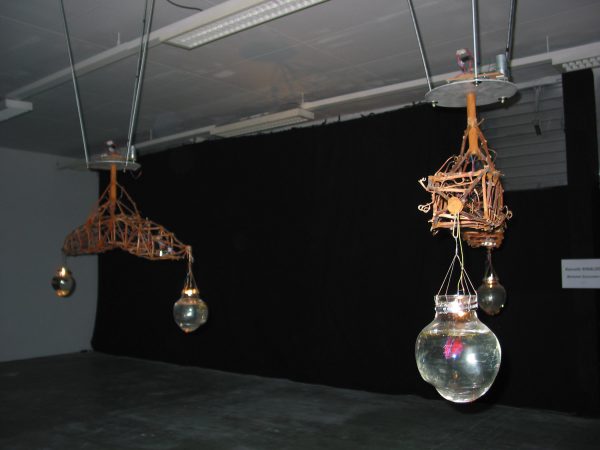 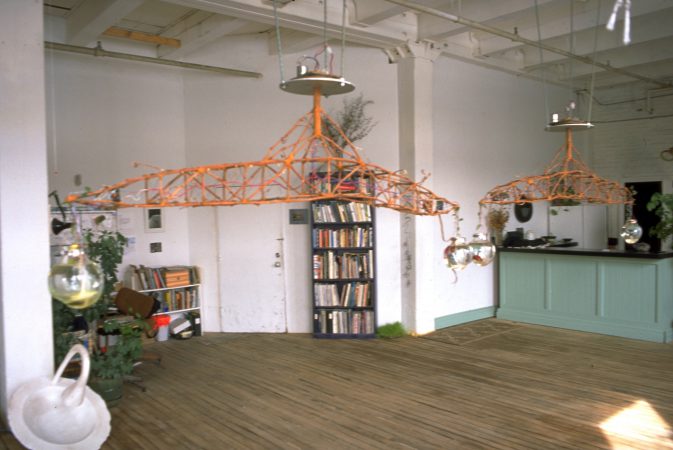 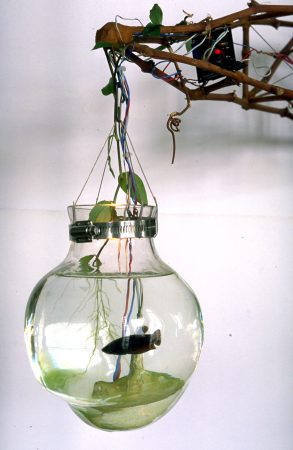 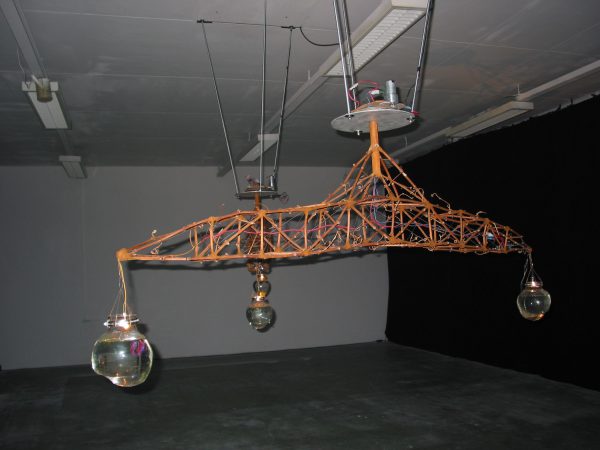 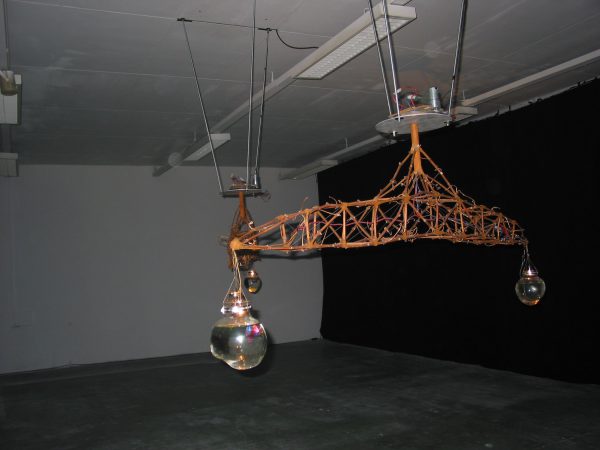 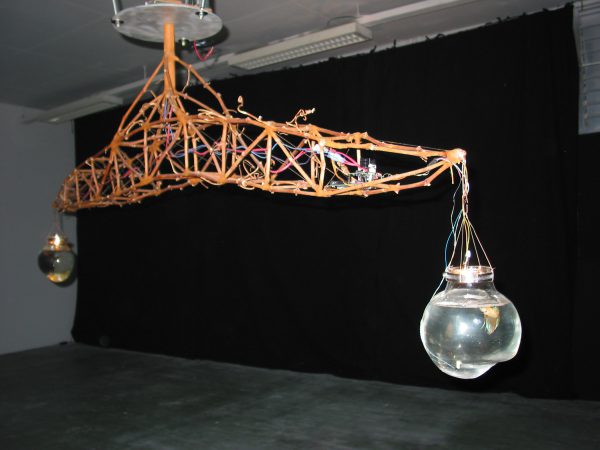 This piece allows, normally aggressive fish, to interact without killing each other and explore their environment beyond the limits of the fish bowls.

The fish determine the direction of the robotic structures by crossing light break-beams connected to the computer which activate motors that move the tanks in the direction the fish look to the outside world.

I wanted to give these Siamese Fighting fish the ability to virtually leave the tank and meet each other by moving it around. Like many fishes, Siamese fighting fish have excellent sight, allowing them to see far outside the tank.

Bettas are found in Thailand and the Malay peninsula and are called by the Thailanders “pla kat” for biting or tearing fish. Siamese fighting fish are particularly aggressive in the presence of other male Bettas. When they observe another Betta, they flare their gills and swim aggressively, presumably to appear much more prominent.

It is typical for male Bettas in the same tank to fight to the death, which fight organizers have been exploiting for many years in Thailand. They are top breathers, meaning they have to come up for air, allowing oxygen to come into direct contact with their blood. Betta fish are not harmed by being kept in small containers, as they often thrive in stagnant, oxygen-deficient environments.

Male Bettas, which are ready to spawn, build extensive bubble nests that they use to attract females. Females that are acceptable to males allow the males to bite them on the flanks. When they spawn, the female Betta is suspended trance like an upside-down, and the male wraps his body in u shape around the female. By exerting pressure, the eggs are dispelled and fall to the bottom.

The males gently retrieve the eggs in their mouths and swim to the surface, spitting them into the bubble nest. This can continue for up to two hours with 60-70 embraces and over 600 eggs produced.

These fish have become cyborgs, using robotic structures to extend and explore their artificial environment and cross breed to be excessively aggressive.

Lens Aberrations; The continued development of micro-machines, biotechnology, and computer systems in the co-creation of intelligent systems will further collapse this gap between the organic and inorganic world.

While these machines expand the spectrum of senses available to humans and other animals, I often wonder if these senses will be used with the proper spirit. Intelligent systems, coupled with sense extension lenses, are getting progressively more transparent and embedding themselves in deeper levels of our sensorium.

Thus the perceptual aberrations that may occur with these lenses are less noticeable. Languages, a linguistic lens or condenser of information, are most subject to mediation through individual interpretation and technological distortions.

The mass media could undoubtedly be considered as one form of extended sense, which is often dominated by the commercial system and relies on continuous repetition for commercial success. Paul Virilio says these messages are designed to “infect, not inform.”

Unfortunately, “consumerist progress-oriented” thinking has prevented us from adequately discussing the long-term ecological and social effects that particular technologies bring, even when these technologies are known to be harmful to the delicate balance of interdependent natural systems. Still, a balance must be possible.

Hubris: This co-evolution of human language, dissemination machines, and sense extension is formed and simultaneously forms our attempts to understand the complexity of natural systems. It speaks of confidence that science can solve all problems or that mathematics and the digital tools we use to scan the world can quantify, measure, and replicate all.

At what point do we become servants to self-replicating technology, its momentum pulling us in its wake? Since we rely on natural systems for sustenance, it seems logical that human-based systems should be designed with ecological principles in mind to permit sustainable interdependent systems of humans, animals, and the technotope.