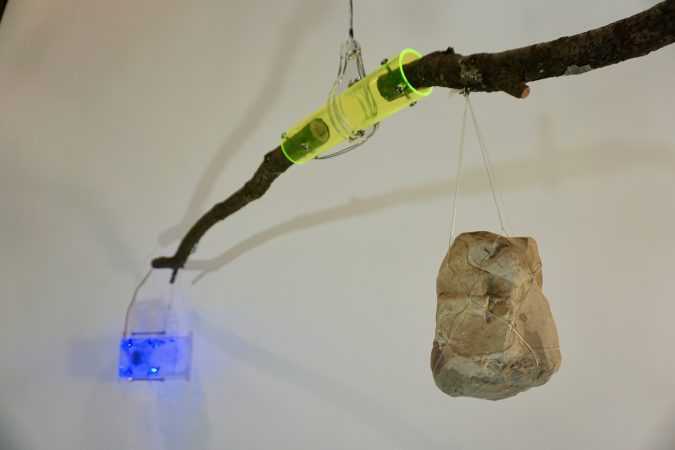 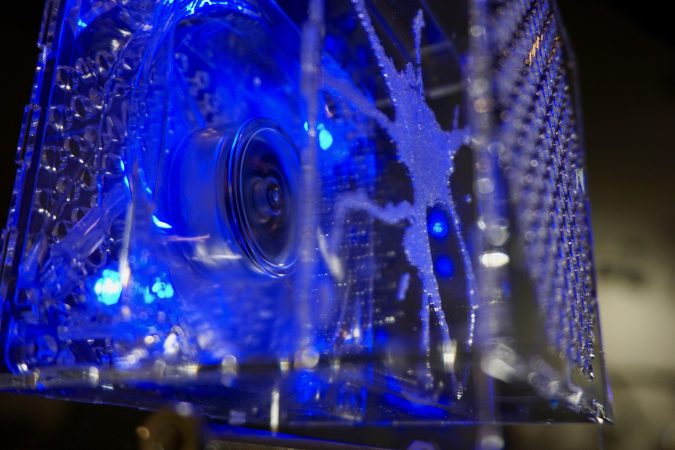 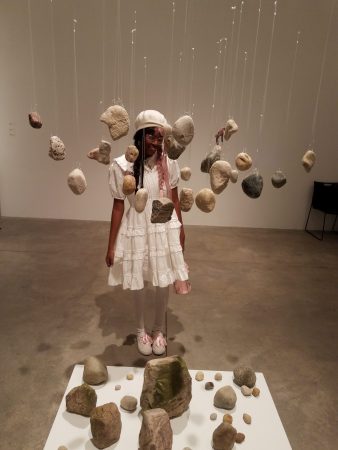 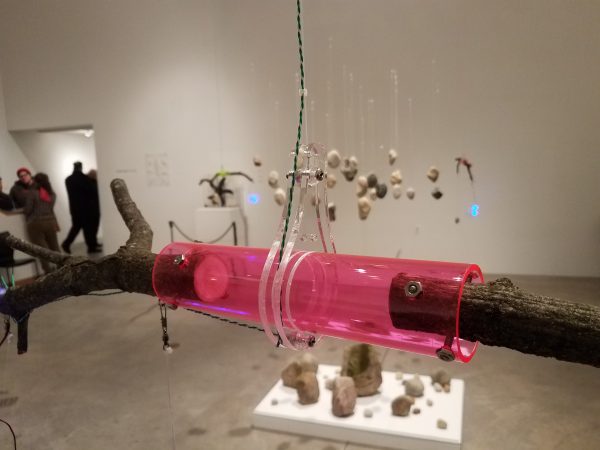 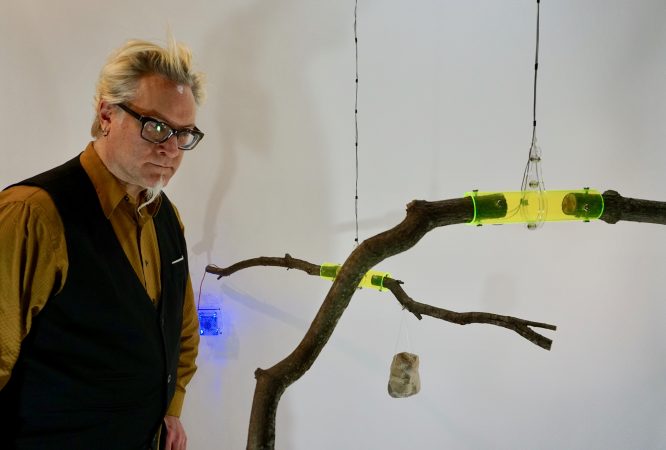 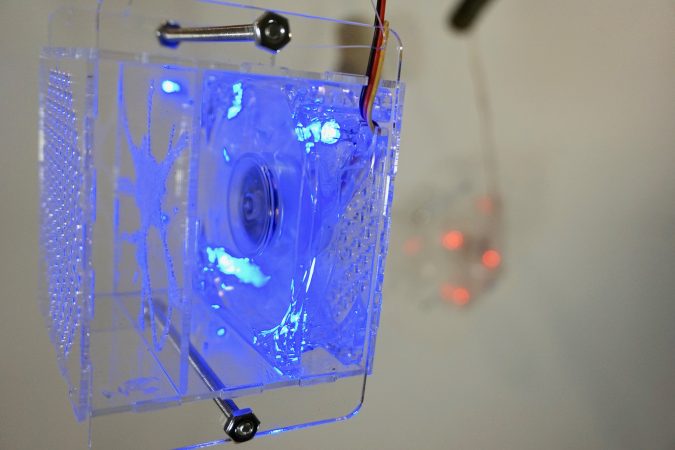 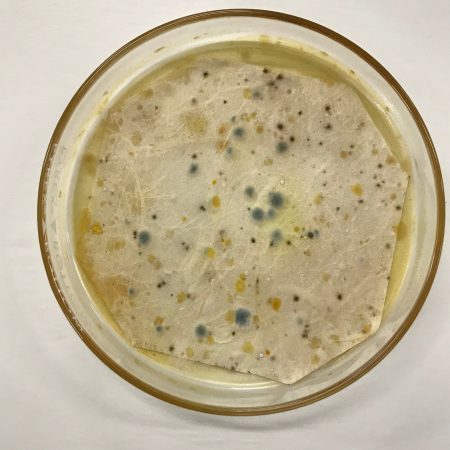 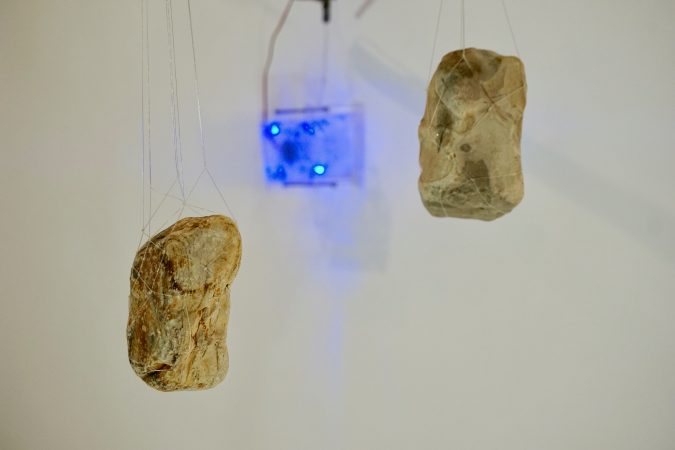 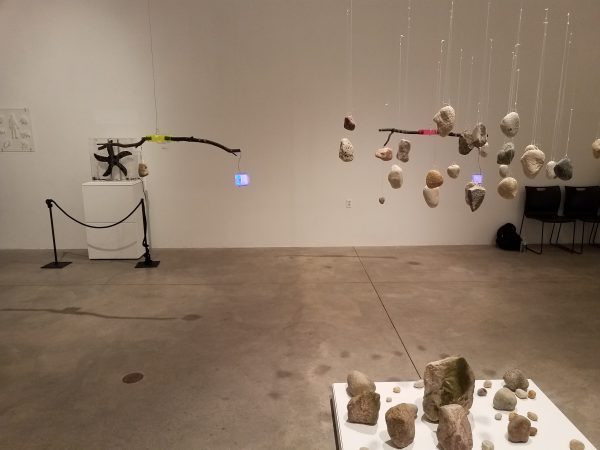 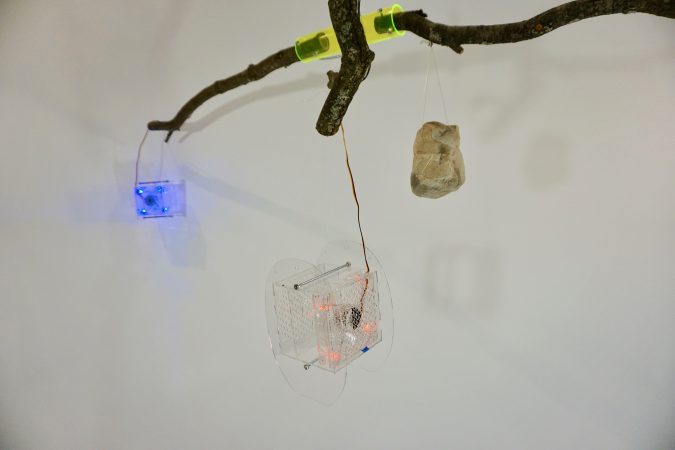 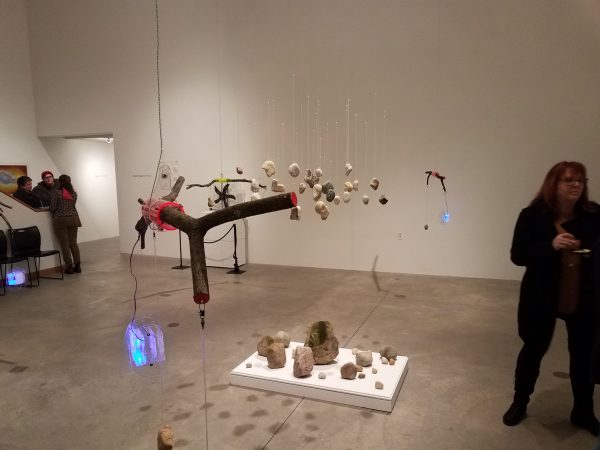 Scatter Surge celebrates microbial life vibrating in and on us. We think of ourselves as individuals, though WE are a multispecies community. Trillions of human cells are connected symbiotically with trillions of bacterial, fungal, and viral cells.

Together WE, with water, light, stone, minerals, air, and atmosphere, have come to form a holobiont. A holobiont is a complex and dynamic ecosystem composed of hologenomes. The intertwining of the host genome (us) and other associated microbial genomes determine this ecosystem’s future.

This installation consists of collection units (fans in Plexiglas boxes with filters) that collect human skin cells, bacteria, fungi, and viruses riding with you. As you enter the gallery, infrared sensors are hooked to microprocessors, switch the collection units on, and filter the air. The cell samples collected on these filters will be grown in sealed Petri dishes, as holobiome-snapshots, contained in a present earth-time. The miniature fans and filter systems I created collect humans and all other DNA in the room.

Therefore this work and technology can also be used to sequence and determine who is in the room with the human participants, including insects, microbes, fungi, and lichens. etc., using metagenomic sequencing.

In 2022 Elizabeth Claire, a molecular ecologist at the York University of Toronto, and Kristine Bohmann at the Globe Institute in Copenhagen, also created collection units to collect DNA from the air and determine the constituents of a zoo, for example. No worries, this was three years after my work premiered, though it served as a nice confirmation of art/science.

It was nice to see these two researchers found the same method I used in the Scatter Surge engineering, and they used polymerase chain reaction (PCR) to look at the DNA sequences.

In my case, I grew the collected samples in Agar mostly to look at the microbial communities.

The stones in the installation reference different earth times, and the unique mineral elements that constitute them are also the substrate of life. For example, the iron in our blood originates in dying supernova stars.

Other essential amino acids of our bodies originate in the elements of these same rocks and stones. The stones here are between 4.7 billion to a few hundred million years old. Some have crystalline structures that have been part of giving rise to early life. Others are visibly fossils, where life had already developed on the earth and left its imprint on these ancient fossils.

This element of the installation was partially inspired by this video.

On the branches, supporting both the stones and holobiome-collection-units, lichen is growing a fungus, symbiotically joined with algae. The term ‘holobiont’ originated when Dr. Lynne Margulis observed and theorized about the complex symbiotic relationships in lichens in her theory of symbiogenesis.

Our collective intelligence and mineral substrates’ unique properties and material nature have now been exploited with technological advances, as silica has been turned into silicon.

Computers and algorithmic logic have given rise to artificial intelligence, and AI now plays a significant role in identifying, categorizing, and forming the world. AI has become a fundamental part of our evolution as a species.

We are “becoming with” with the algorithm, functioning as idea amplification devices, allowing life-like simulations and artificial life to bloom.

The curator Claudia Berlinski videotaped this excellent performance during the show’s run. I loved the flute, fans, and piano coming together with all that musical cellular dust.

The Seed Series, in the background, looks at the logic of plants, their evolved wisdom, and agency, using wind, water, and fur to propagate their genes. We can understand that logic, and those growth strategies can then be applied to computer algorithms to help shape and create phantasmagorical seeds. Seeds that do not naturally exist, but through software, design strategies, and speculative fiction, can come into existence.

This Seed Series also speaks to the ease with which we can use CRISPR Cas9 genetic manipulation technologies to shape actual genetic variants. CRISPR Cas9, genetic scissors, allow more precise editing of genes and will enable the creation of designer seeds beyond our wildest imaginations, where plants and animal genes can be mixed.

Amazingly, this technology was adapted from a naturally occurring genome editing system that evolved in bacteria and was later discovered by Emmanuelle Charpentier and Jennifer Doudna.

In the Seed Series, I use 3D software to propose these conflations of plant, animal, bacteria, and insects, all coming together into speculative fabrications. The Seed Series defines ways to understand, make, and rethink our relationship with artificially constructed, non-human others.

Additionally, symbiotic microorganisms occupy a wide range of skin niches, providing vital functions that the human genome had not yet evolved while symbiotically protecting against invasion by more pathogenic organisms.

The cell samples collected on these filters will be grown in sealed Petri dishes, as holobiome-snapshots, contained in a present earth-time.

The stones in this exhibition are between 4.7 billion to a few hundred million years old. Some have crystalline structures that have been part of giving rise to early life.

Others are visibly fossils, where life had already developed on the earth and left its imprint in these now ancient fossils.

On the branches, supporting both the stones and holobiome-collection-units, lichen is growing.  Lichen is a fungus symbiotically joined with algae. In this installation, I am particularly interested in asking questions about the skin cells, which can become any cell as I-Pluripotent Stem Cells, and their relationships with the microbes that tune them.

Our collective intelligence and mineral substrates’ unique properties and material nature have now been exploited with technological advances, as silica has been engineered into silicon.

With this silicon and robotic control technology, we can now begin to replicate some responsive and purposeful behaviors in artificial life systems.

These works automatically switch on when humans enter space and collect their skin cells.

What is the relationship between bacteria, fungi, and viruses that interact daily with those cells in tuning them and keeping them healthy?

A new study discovers that common skin bacteria can protect against cancer. Researchers say a strain of Staphylococcus Epidermidis highlights the importance of some microorganisms to the health of the human body.

Scientists have discovered that bacteria can also be used to prevent and treat various forms of cancer, and the study’s results are in the journal Science Advances. The scientists described the strain of Staphylococcus Epidermidis and how this bacteria secretes a chemical that eliminates harmful bacteria known to be responsible for infections.