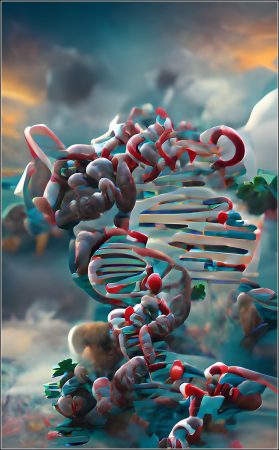 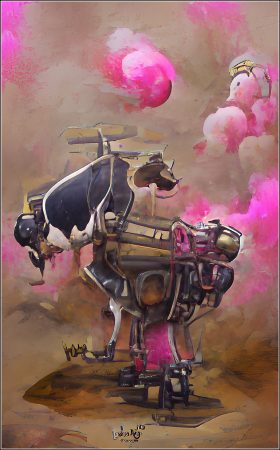 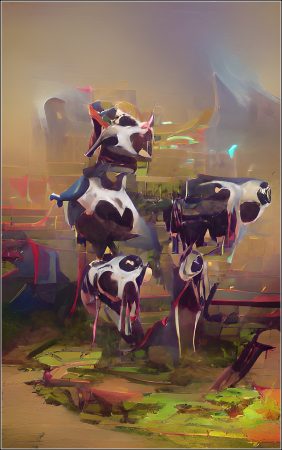 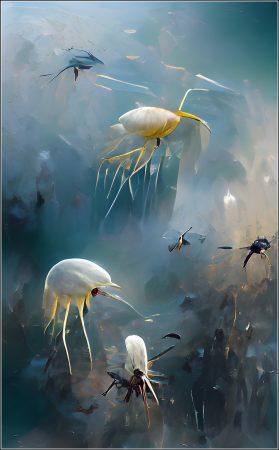 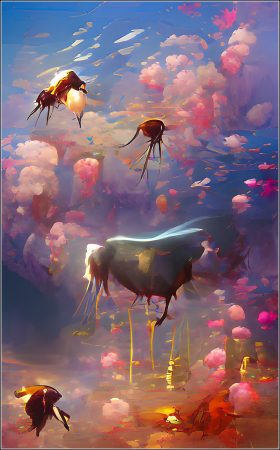 Tepoztlán, Mexico, is known for agriculture, significantly growing corn (Maize), chili and tomatoes, livestock, and the weekend markets or Tianguis. At the same time, DNA modifications are used on livestock to create artificial spare parts for humans. Corn is under siege with genetically modified varieties, pushing its way into traditional agricultural processes.

Through artificial intelligence remixes of culture, this series captures these complex times and how a town maintains its traditions, livestock, and agriculture tuned to the environment through generations of farmers while genetic modifications surge elsewhere.

These artworks are collaborations between the artist and computer algorithms, and they are originals supported with actual DNA to confirm their originality. Creating these algorithmic artworks uses style transfer and language keys to access massive databases online before the artist creates and manipulates these images in real-time after the renders are complete.

In the current craze of NFTs, Non Fungible Tokens confirm the originality of the work; I have chosen to go with a bit of my hair (DNA) and a traditional signature on the back of each piece to verify their authenticity. Therefore, they are DNA Fungible Tokens, and PCR (Polymerase Chase Reactions) can be used to confirm their originality, which is the greenest solution I know.

The City of Indigenous Corn 2020 is an artificial intelligence abstraction referring to the conflation of the remains of the El Tepozteco temple built on top of the nearby Tepozteco mountain and the colorful corn one finds in the region. Rich copper tones in the work reference copper mining in the area.

CRISPR Cas9 Proteins Amino Acids 2020 is an artificial intelligence abstraction referring to the most recent methods of modifying animals and traditional crops. The works clouds speak to the colorful and often dramatic changes afoot.

Great White Heron Tepoztlán three Boxes 2020 is an artificial intelligence abstraction referring to the myth of Tepoztón about a laundress who works in Tenochtitlan. As a form of payment for some work hanging a bell in a church, he receives boxes and is instructed not to open them. However, his curiosity gets the best of him, and he opens and lets the birds out, and they become a symbol of the riches and well-being of the people of Tepoztlán. The Great Egret, Heron Ardea alba, is one of four subspecies of the Great Egret, the only one found in Mexico. It is large and elegant with dazzling white plumage, long black legs, and a long neck with a yellow bill.

Xeno transplantation Pink Cow Udder 2020 is an artificial intelligence abstraction referring to the genetic modification of cows to be more productive. This image has cows hooked to machines and becomes something other than a cow and, in the process, points to the purity and integrity of natural agricultural methods. The work also refers to recent experiments in humans’ breeding animals for Xeno Transplantation.

Land of Indigenous Maise 2020 refers to the rolling hills and agriculture of Tepoztlan and the colorful corn one finds in the region. Rich

agriculture with green pastures below. These are cows coming out of the fog

CASAHUILO ART GALLERY                   Tepoztlán, Mexico, Feb 19th, 2022
World-Wide-Premiere of the eight new artificial intelligence and hand-worked pieces focused on the agriculture of Mexico and The Legend of Tepozteco, as well as the ethics of xenotransplantation. + A new Fungible DNA token will be used on each work, contrary to NFTs. Curated by Axel Cuevas Santamaria